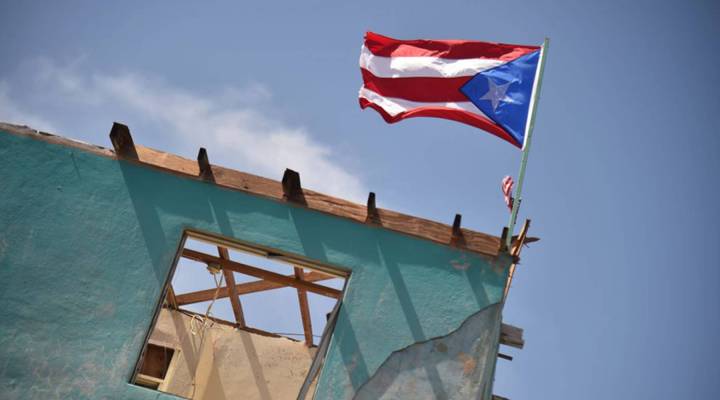 COPY
A flag of Puerto Rico is seen on a damaged house in Yabucoa, in eastern Puerto Rico, on Sept. 28, 2017. HECTOR RETAMAL/AFP/Getty Images

A flag of Puerto Rico is seen on a damaged house in Yabucoa, in eastern Puerto Rico, on Sept. 28, 2017. HECTOR RETAMAL/AFP/Getty Images
Listen Now

When Hurricane Maria flooded Andres Reyes’ home in Cidra, Puerto Rico, he stayed on the property for as long as he could. The island’s central mountainous region, where Reyes had lived for 37 years, had been badly hit. Reyes slept inside his home for one month as the water receded and, when he contracted a bacterial infection, he moved outside for two months.

“I would take my pillow, my blanket — my cousin gave me a little foam mattress,” he  said. “I would roll it out, put it there and I would sleep in the car.”

Reyes, who’s 60 years old, was diagnosed with severe depression eight years ago and depends on Social Security disability benefits. After months of stress, he left Puerto Rico for Kissimmee, Florida.

He has been staying in a hotel room there since December. Reyes’ monthly check of $788 isn’t enough for him to secure an apartment. In this part of Florida, the median rent can hit about $1,100 a month.

Andres Reyes has been staying at the Ramada in downtown Kissimmee, Florida, since he evacuated Puerto Rico last December.

The Federal Emergency Management Agency said it will end its temporary housing assistance on June 30. The agency has temporarily housed more than 7,000 Puerto Rican families in hotels in 30 states and Puerto Rico since the program began in October. Of those, 973 individuals were 60 or older. As of June 5, that number had been reduced to 1,945 families and 270 individuals 60 or older. FEMA has spent $78.7 million on its transitional shelter program for Puerto Rican evacuees so far, reimbursing hotels in Kissimmee $129 a day per room.

“We have a number of elderly who are having a harder time being able to get ahead,” Nieves said.

His church, along with a network of United Methodist churches, have been helping evacuees by offering food, rental assistance and apartment placement. Some older evacuees have moved in with families. Others who can’t find relatives to stay with have medical needs and income limitations.

“The resources to help families with fixed income in Osceola County are limited because there was already a waiting list to help these families,” Nieves said.