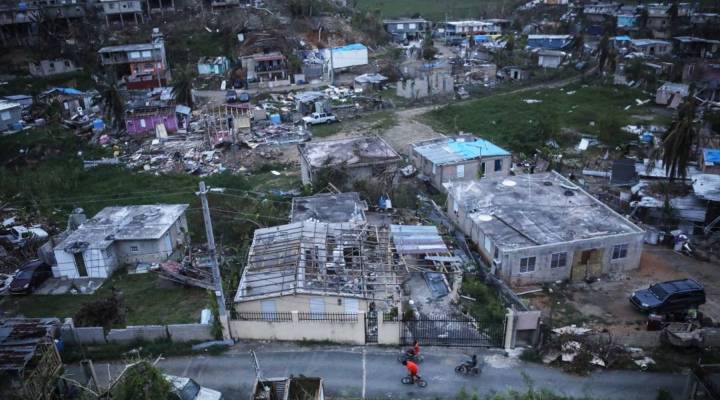 Kids bike in an area without grid power or running water about two weeks after Hurricane Maria swept through the island on October 5, 2017 in San Isidro, Puerto Rico. Mario Tama/Getty Images
Listen Now

When tech companies show up in a disaster zone, it’s not pure altruism.

“The reason why companies will come in after disasters is that the slate has been swept clean,” said Robert Collins, a professor of public policy at Dillard University in New Orleans. “There’s a void. There’s a vacuum.”

“When that happens, you’re going to see health and safety regulations tossed aside,” Collins said. “And there’s no guarantee that the locals are going to get most of those jobs.”

“It’s not a time to experiment with something that hasn’t been proven,” Goentzel said. “But rather leverage ones that have been proven to some extent but might not have been used in this particular way. And that’s innovation.”

Alphabet used its helium balloons after recent flooding in Peru. Tesla has built solar grids on other islands. Madhu Beriwal with Innovative Emergency Management, said companies should not over-promise.

“You create a sense of hope, especially when they hear names like Alphabet and Elon Musk that our troubles are going to be over soon,” Beriwal said. “And if that doesn’t bare out, survivors are affected even more by having their hopes dashed.”

Puerto Rico’s needs are great — with more than 80 percent of the island still without power, and 75 percent of cell towers down.