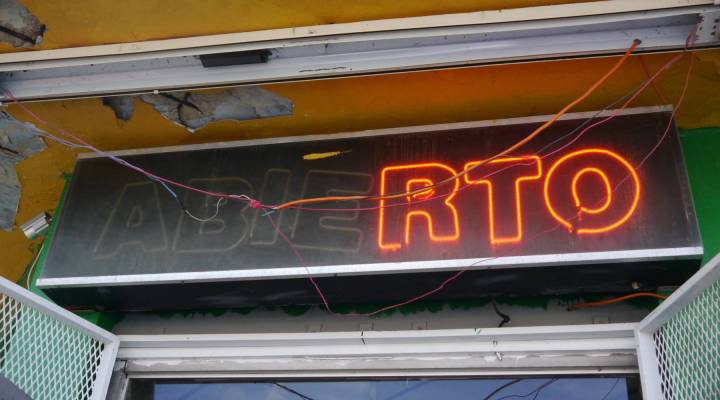 COPY
A convenience store in Toa Baja, Puerto Rico is open, after the owner lost $25000 in spoiled goods after Hurricane Maria. Joanne Griffith/Marketplace
Economics of Disaster

Looking out over the 127 acre Bacardi rum plant in Puerto Rico, the smell of molasses floats on the breeze.

“When you’re fermenting, you’re also producing CO2 and other things with smell,” said José Class, Bacardi’s manufacturing director. He’s responsible for the 500,000 barrels ageing at the facility, worth around $200 million. Class is thankful that Hurricane Maria didn’t damage stocks or hurt supplies. “Right now it looks completely different and beautiful, ” he said “This really looked like a battlefield.”

The Bacardi rum plant was back up and running less than two weeks after Maria. Good news for the place that produces 80 percent of Bacardi’s rum and employs 300 people. The company has paid it’s employees throughout hurricane recovery.

“We got some comments from our primos [workers] saying ‘coming to Bacardi to work it’s like a bubble, because you forget all that’s going on around,'” Class said. “But then people told me ‘at four I get depressed because I have to go back to the reality of no power, no hot water, no food.'”

A little tour bus rolls by with hurricane relief workers enjoying a day off. Tourism is another part of  Bacardi’s business model. Numbers have dwindled since Maria, Class said. “We received 1,000 tourists per day, currently we’re receiving 30.”

The plant usually makes 100,000 liters of rum a day, but power issues are challenging, Class said. “Because we are between the two [power]plants in San Juan, we had electricity the week after Hurricane Maria. But then after a few days it began collapsing every day, and there’s no way you can sustain an operation like that.”

The rum factory has generators from Florida and wind turbines on site to help produce energy independently. It also helps maintain production and distribution, Class explained. “We have one to two months [of rum]  that in theory I could keep supplying the market. We’ve done this for ages because we’ve always lived under the threat of hurricane.”

Since Maria, Bacardi has been able to pay its staff during the recovery. Yet nine miles away in Toa Baja, the story is very different.

Downed power lines hang close to the doorway of Juan Orta’s convenience store. The open sign – Abierto – is criss-crossed with wires and only half lit. Like Bacardi, Orta reopened two weeks after Maria. One of his biggest concerns? “Basically we are spending $400 in diesel every four days,” he said. The diesel powers Orta’s generator 24 hours a day, even though his store isn’t open then.

“I lost between $20,000 to $25,000 in the hurricane. I had freezers filled with meats. Now I only buy basically what people consume a day,” Orta said. The shelves have canned goods, the refrigerators hold just a little turkey, some eggs, cheese, a few bottles of milk. He reopened the store with his own savings.  Orta’s home was also flooded in the storm. He’s applied for FEMA assistance but not for the store. As for how long Orta can stay open?

“It’s basically been a lot of effort to try and stay on my feet,” he said, “but we’re on our feet, and we’ll keep fighting until God permits.”