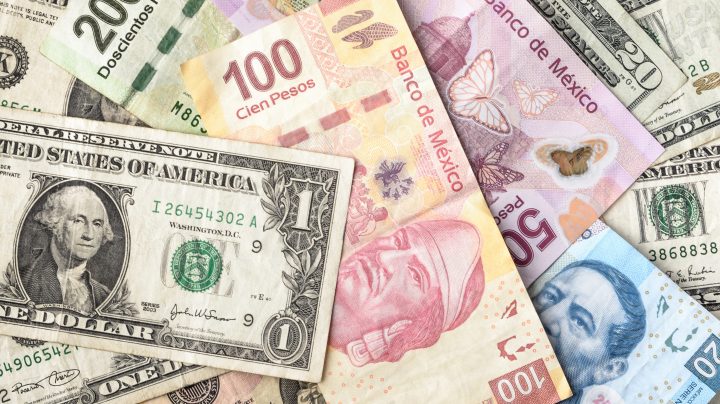 COPY
If the value of the dollar climbs against a currency like the Mexican peso, Mexico's debt payments increase. agcuesta/Getty Images

If the value of the dollar climbs against a currency like the Mexican peso, Mexico's debt payments increase. agcuesta/Getty Images
Listen Now

All those interest rate hikes by the Federal Reserve we’ve been telling you about? They’ve pushed up the value of the U.S. dollar — a lot.

That’s great for U.S. travelers; your dollar buys more in Paris these days. But it’s not so great for other countries if they have to pay for staples like food in dollars or borrow in the U.S. currency. And many do.

The dollar is on a roll, soaring to a 20-year high against other currencies.

The higher dollar is a burden for countries that import a lot, according to Brad McMillan, chief investment officer for Commonwealth Financial Network.

“If you’re in a country that is paying for supplies like oil or fertilizer, those are priced in dollars, so the price you have to pay in local currency goes up significantly if the dollar is worth more,” he said.

Essential commodities like grain, iron and copper are also dollar-denominated. Even that staple of British life — tea — is priced in dollars. Many countries also borrow in the U.S. currency.

If the value of the dollar rockets against a currency like the Mexican peso, debt payments cost a lot more, said Harvard economist Jeffrey Frankel.

“When the dollar is strong — when the peso depreciates against the dollar — if it’s a 50% depreciation, suddenly it’s become twice as expensive in terms of pesos.”

Some countries, like Pakistan, are already in trouble, per Zongyuan Zoe Liu at the Council on Foreign Relations. She describes Pakistan’s dollar-denominated debt as a ticking bomb — which could be defused if the payments were restructured.

“But that restructuring does not necessarily mean the country’s debt level is reduced,” Liu said. “It’s just a delay or a restructuring in payment.”

If a country just can’t pay, it defaults. That’s already happening. Lebanon and Zambia defaulted on U.S. dollar loans a couple of years ago.