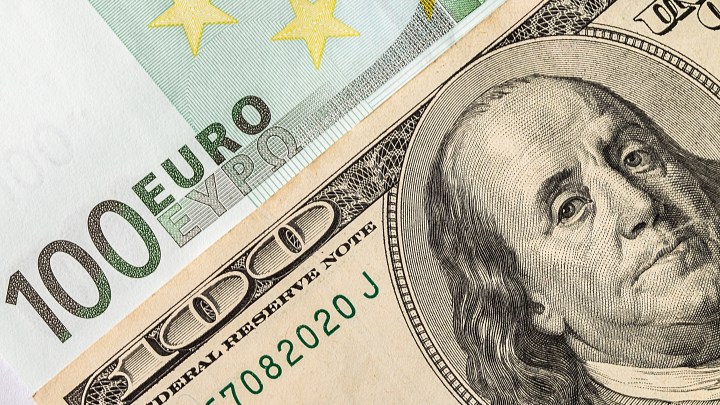 COPY
The dollar is essentially at par with the euro — lower than it’s been since the European common currency was launched. mars58/Getty Images

The dollar is essentially at par with the euro — lower than it’s been since the European common currency was launched. mars58/Getty Images
Listen Now

For more than a year now, the U.S. dollar has gradually been gaining strength relative to other major global currencies, like the euro, yen, yuan and Canadian dollar.

This morning in European trading, the dollar index, which measures the greenback against a basket of other currencies, briefly hit a 20-year high before falling back a bit later in the day. The dollar is now essentially at par with the euro — $1 will get you one euro. That’s lower than it’s been since the European common currency was launched in the early 2000s.

The most important force driving the dollar up against other major currencies is U.S. monetary policy.

“It starts with the Fed,” said Ross Mayfield at Baird. Not only has the Federal Reserve been raising U.S. interest rates aggressively to wrestle down inflation, but Fed Chair Jerome Powell has pledged he won’t stop until he wins.

“The Fed is probably the most influential central bank in the globe, as hawkish as any right now in order to tame down domestic inflation,” Mayfield said. “And so as U.S. interest rates rise, capital flows into our country, pushes up the price of the dollar.”

The dollar’s rise is also about what’s going on in the rest of the world, said Maurice Obstfeld at the Peterson Institute for International Economics.

“There’s a strong tendency for the dollar to strengthen whenever the global economy is in some sort of crisis. And so, as markets panic, investors flee to safety, the dollar appreciates.”

The dollar’s persistent strength also tells us something about the U.S. economy’s prospects, especially compared to Europe’s, which is in the midst of war and already likely in recession, said Jay Hatfield at Infrastructure Capital Advisors.

“Europe is having an energy crisis — it’s getting worse and worse almost every day,” he said. “So we think the fundamentals in the U.S. are quite strong, but they’re quite weak in Europe.”

There are losers from the strong dollar, including U.S. exporters, whose products are more expensive for foreign buyers.

But if you’re an American and fly across the Atlantic, “this is a great time to be spending dollars in Europe,” said Sharyn O’Halloran, who studies political economy at Columbia University.

She’s on sabbatical in Dublin, where she did the latte test — buying her morning joe in euros. “It’s 3.50 [euros] here. And then you do it relative to what the latte would cost in New York.” Which is $4.75 at the Starbucks down the street from the Marketplace bureau in Manhattan.