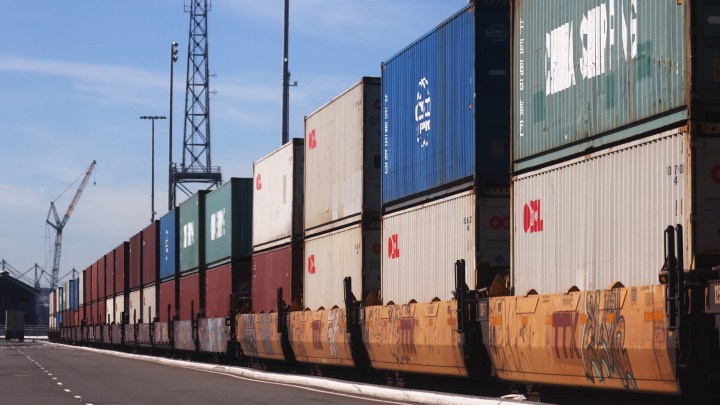 COPY
Some businesses have had to adjust shipping strategies — like opting to ship by rail — to circumvent delays at ports. Mario Tama/Getty Images

Some businesses have had to adjust shipping strategies — like opting to ship by rail — to circumvent delays at ports. Mario Tama/Getty Images
Listen Now

We’ve been seeing some signs lately that congested supply chains have been getting a little less congested. The New York Federal Reserve tracks global supply chain pressure, and it’s indicated that things have been easing up in recent months. Then, there’s the Drewry World Container Index, which tracks shipping container prices. It’s been falling.

But if you ask small businesses whether they’ve seen any improvement in their supply chains, you might hear a different story.

It’s been a busy summer at Palmetto Tile Distributors, a supplier and importer based in South Carolina. That’s because a lot of people have been remodeling their homes, said Cathrine Reynolds, a designer with the company.

“Housing prices all over the country are through the roof, so a lot of people, instead, are just investing back into the property that they already own and making it the way they want,” Reynolds said.

But the tile people want often hasn’t been available. Reynolds manages the company’s imports, which come mostly from Europe. She said things are still moving slowly through the ports of Savannah and Charleston. The company is also paying higher storage fees for imported goods, and shipping containers are still expensive.

Shipments from her domestic manufacturers aren’t much better. They’re adding fuel surcharges and having problems sourcing materials. Plus, there’s a shortage of truck drivers.

These are all problems businesses have been experiencing for a while. And Reynolds said she’s not expecting any of them to let up for a while.

“I don’t see us having any improvements well into next year, if then even, unfortunately,“ Reynolds said. “I wish it was different, because it would make my job a lot less stressful.”

Things haven’t been much better for equipment supplier TMB Baking near San Francisco. It imports a lot of equipment from Italy, but the way it usually does that — shipping equipment through the Panama Canal and up to the Port of Oakland — has been taking way too long.

“Most recently, it’s taken over three months to get equipment to us,” said Greg Warwick, CEO of TMB Baking. “And that was about a 28-day quoted timeframe pre-pandemic.”

Warwick said he has to bring that timeframe down because there’s a big baking equipment trade show in Las Vegas in September, the first one since the pandemic started.

“We have customers coming throughout the U.S. to visit TMB Baking and see our equipment,” he said. “So it’s critical that we get that equipment there to be able to show it to them.”

So a couple of months ago, Warwick tried a new strategy: shipping equipment to the East Coast, then moving it to the Bay Area by rail.

“It will cut, definitely, at least a month off of that timing to get it here,” he said.

Further south, outside of Los Angeles, it’s been getting a little easier for Hawaii Supermarket to import products.

That would normally be welcome news, given that throughout the pandemic, Duong has been trying to make sure his store has enough products available. But lately, he said demand for the grocery items he sells has been falling.

“Prices have gone up so much for the same items,” Duong said. “We’re selling less of them.”

As a result, Duong said he’s getting more cautious about importing too much and building up too much inventory.

“We’re not really sure of what’s going on with the economy, and how much demand there’s going to be for the second half of the year, and going into next year.”

All of which means Duong isn’t worried about how congested his supply chains are.