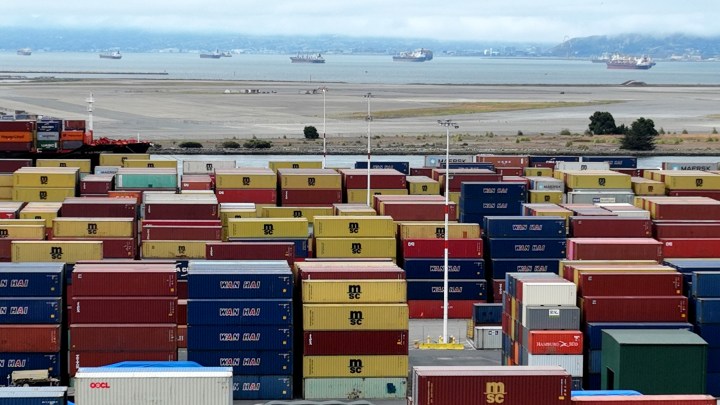 COPY
The costs associated with shipping containers surged last year. Although those costs have eased, they remain above historic averages. Justin Sullivan/Getty Images

Shipping giant Maersk is raising expectations for a key measure of profit, known as EBITDA, that it expects to bring in this year. The new forecast is way up: $37 billion compared to a previous projection of $24 billion.

The shipping industry has had a string of record-breaking quarterly profit reports of late. But what is the current condition of the supply chain?

In 2022, the global supply chain “feels a lot like it did in 2021, unfortunately,” said Eric Fisch, head of consumer and retail lending at HSBC’s corporate bank.

That is to say, not great. Sentiment among his clients, who are mainly in the apparel industry, even sounds a lot like it did in 2021. “More of, ‘We have to get over this period of the next six months.'”

They’re working through a glut while continuing to import more. The cost to ship in a 40-foot container surged above $20,000 last year, according to Reuters.

Today’s supply chain woes are largely a systemic problem, according to Morris Cohen of the Wharton School at the University of Pennsylvania, “that is occurring globally, across multiple industries and multiple geographies.”

It’s resulting in all kinds of shortages, said Diana Furchtgott-Roth, adjunct professor of economics at George Washington University. Take flour, for example. “The higher price of flour is due to the war in Ukraine, whereas the semiconductor chip problem is due to slowdowns in China.”

Many companies are still figuring out whether to change the supply chains they’ve relied on for so long, said Donnie Williams, executive director of the University of Arkansas’ Supply Chain Management Research Center. They’re scoping out the whims of the American consumer.

“I don’t think anybody’s really confident if our demand, if our buying patterns, are a long-term phenomenon yet. We’re already starting to see some of those easing up,” Williams said.

Plenty of companies might remain in an extended holding pattern, he added, because the state of the supply chain six months from now is anyone’s guess.