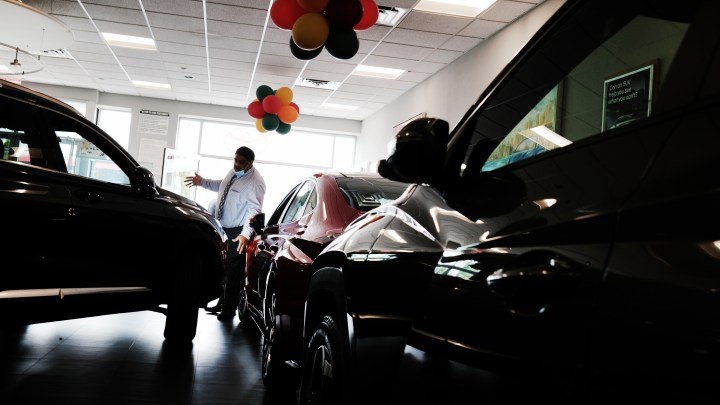 COPY
There are more new cars available to consumers, but it's more because of slowing demand than easing supply chain issues. Spencer Platt/Getty Images

There are more new cars available to consumers, but it's more because of slowing demand than easing supply chain issues. Spencer Platt/Getty Images
Listen Now

The Federal Open Market Committee meets this Tuesday and Wednesday, and top of the agenda will be deciding how much to raise interest rates in the Fed’s all-consuming quest to slow economic activity and fight inflation.

One of the key economic dynamics the Fed is following is supply chains — whether they’re still all gummed up from COVID-related production and shipping disruptions, demand imbalances and the Russia-Ukraine war.

The Fed wants to know how much impact global supply chain problems are having on inflation — driving up the prices that businesses pay each other for supplies and that consumers pay at the store or the pump or wherever.

A new survey from the National Association for Business Economics has some sobering answers.

The July survey of corporate economists showed essentially no improvement from three months earlier. A record number of firms reported material shortages, and most are passing on higher costs for inputs to their customers.

Supply chains remain volatile and unpredictable. In construction, lumber and steel prices have eased off recent highs, according to Ken Simonson, chief economist at Associated General Contractors of America. But “chips and wallboard are going up, concrete and glass,” he said.

“It’s been chaotic,” said Lewis Black, CEO of Toronto-based mining company Almonty Industries, the biggest global supplier of tungsten outside of China. Ever since the pandemic hit, he said the shipping space has been scarce and prices have soared.

“Planning is really out the window. If you’re lucky, you’re having a good day, you get some space. And if you’re not, you don’t.”

One sector where supply chains have improved, at least a little, is the auto industry.

“A combination of growing recessionary fears, rising interest rates and new vehicle prices that are still hitting a record high has really led to some demand destruction,” Nelson said, meaning fewer people are buying new cars. With less pressure to roll new vehicles off the assembly lines, automakers, shippers and dealers have more chances to catch up.