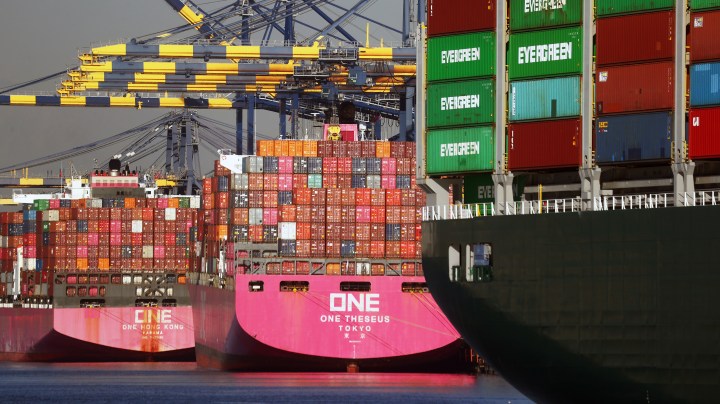 COPY
Without the supply chain bottlenecks we've experienced, we might have seen 6% inflation at the end of last year, instead of 9%, a New York Fed economist posits. Mario Tama/Getty Images

Without the supply chain bottlenecks we've experienced, we might have seen 6% inflation at the end of last year, instead of 9%, a New York Fed economist posits. Mario Tama/Getty Images
Listen Now

There are lots of theories about what caused inflation to start creeping up during the pandemic. And the latest is from a New York Fed economist.

“Those numbers pass the smell test, certainly,” said Sarah House, a senior economist with Wells Fargo. “The supply chain constraints that we’re seeing wouldn’t have been so overwhelming and so inflationary if you didn’t have consumer demand continuing to roar.”

Plus, workers demanded higher wages, per Brandeis economic professor Stephen Cecchetti. And companies raised their prices to cover those bigger paychecks. “It’s certainly going to be a big contributor to inflation, right? Because you have to raise wages and that raises costs.”

The blog post says that, without all those supply chain kinks, we would have had 6% inflation at the end of last year, instead of 9%. The blog ends on an optimistic note, saying we could see “a substantial drop in inflation” if supply chain bottlenecks continue to loosen up.

University of North Carolina economist Camelia Kuhnen isn’t so sure though, because inflation expectations have become ingrained and workers will keep demanding higher pay.

“Firms are going to therefore have to pay the higher wages and increase prices of goods to be able to pay those higher wages, and so we’ll have inflation continue to be high,” she said

It’ll be up to the Federal Reserve to tamp down those inflation expectations, she said, by showing it’s willing to keep raising interest rates to cool off the economy.