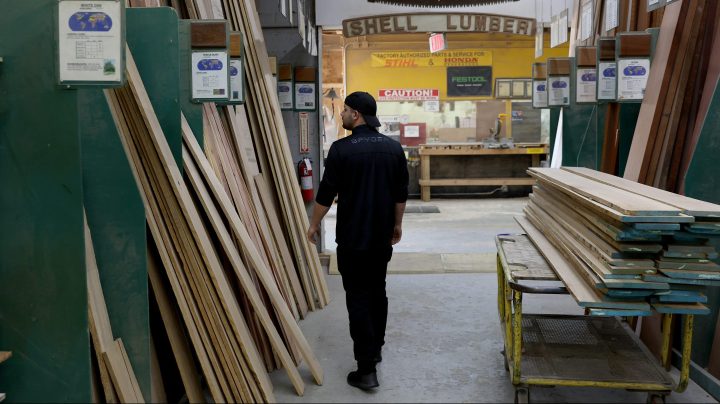 COPY
Lumber prices were up 25% in January. Strong demand for homebuilding materials is one reason. Joe Raedle/Getty Images

Lumber prices were up 25% in January. Strong demand for homebuilding materials is one reason. Joe Raedle/Getty Images
Listen Now

The latest producer price index from the Labor Department came out Tuesday. Overall producer prices were up 1% in January, and they were up nearly 10% from a year earlier. But buried in the report is a big jump in the price of lumber — up over 25% in January.

There is high demand for lumber, thanks to the booming housing market and new construction.

“The number of apartments that are under construction today is the highest it’s been since 1974,” Mark Vitner, a senior economist with Wells Fargo, said.

According to Vitner, the bulk of single-family home construction is happening in the South. “That allows for more construction to take place during the winter months, and I think that’s putting a little bit more seasonal pressure on lumber prices,” he said.

But lumber supply has been facing issues as well. There’s a shortage of workers available to move the material. “The whole transportation sector, between rail and trucking, has slowed down,” said Brian Leonard, a lumber analyst with RCM Alternatives.

January’s price spike doesn’t reflect disruptions from the trucker protest at the Canadian border. Canada is a major supplier of lumber to the U.S, and the province of British Columbia was hit with torrential rains late last year, which washed out lumber transportation routes.

“It just devastated some rail lines and some highways. So it’s just been a logistics nightmare times two,” Leonard said.

Then there’s omicron. According to Greg Kuta, the CEO of Westline Capital Strategies, lumber mills in Canada and the U.S. have had a lot of employees calling out sick lately.

“Instead of having call-offs of 15%, you have call-offs of 25, 30%,” Kuta said. “So instead of running two shifts, you’re running a shift and a half to one shift.” He said all that lumber will eventually move through the bottlenecks, especially since producers have an incentive to sell as much as they can.

“Whether it’s Canadian, U.S., European, you’re going to bring supply from all over to take advantage of these returns,” he said. As that happens, lumber prices could come down.