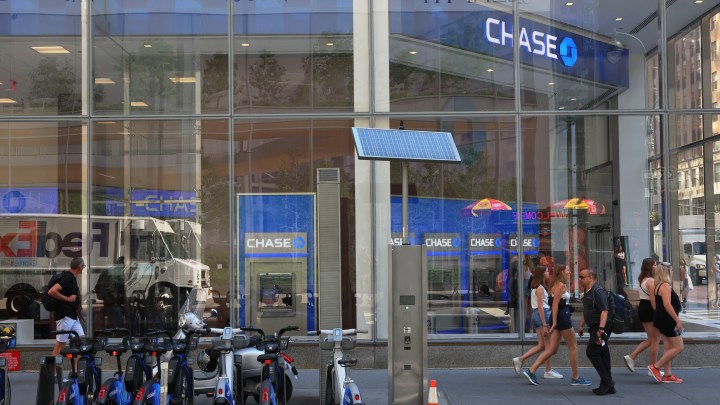 Last year was a record year for stock buybacks, and that trend has continued into 2022. But JPMorgan announced Thursday that it’s pausing its buyback program after a worse-than-expected 28% fall in quarterly earnings. CEO Jamie Dimon also cited economic worries, like the war in Ukraine, inflation and Federal Reserve tightening.

Let’s take a step back: What are share buybacks? And what does it mean for a Wall Street behemoth to be stepping away from them?

If you have a bunch of extra cash sitting around, financial advisers will say you should do something with it. The same goes for companies.

Some businesses might use some of the cash to invest in technology or factories or even hire more people. But more established companies sometimes invest in themselves literally, through stock buybacks.

“The company is basically buying itself,” said Eric Compton, an equity research analyst at Morningstar.

When a company buys its own shares, it pushes up its stock value, Compton said. “So, it’s kind of like a way of them giving back to their shareholders.”

Now, there are times when a company wants to hoard excess cash, which is why it would suspend buybacks or not start them in the first place. Maybe there’s a merger or acquisition in its future. Or maybe it’s just looking to build some savings cushion — like anyone would — in case there’s, say, an impending economic slowdown.

“We don’t know if this’ll be a Category 1 hurricane or a Category 5 hurricane,” said David Kass, a professor of finance at the University of Maryland. “An appropriate defensive strategy by large corporations would be, ‘Hey, maybe we should start conserving our cash now.'”

Any company can suspend buybacks. But it’s news when a major bank does it because they have so much global data about consumer savings, spending and debt. Does that mean JPMorgan’s move spells doom and gloom?

“It’s a cautionary note,” said Howard Silverblatt, an analyst at S&P Dow Jones Indices. “But the view of a single bank — even a major bank — while important, does not set the tone and the trend going forward.”

If we start to see a bunch of other big banks do the same, then, he said, we should lean in a little closer.