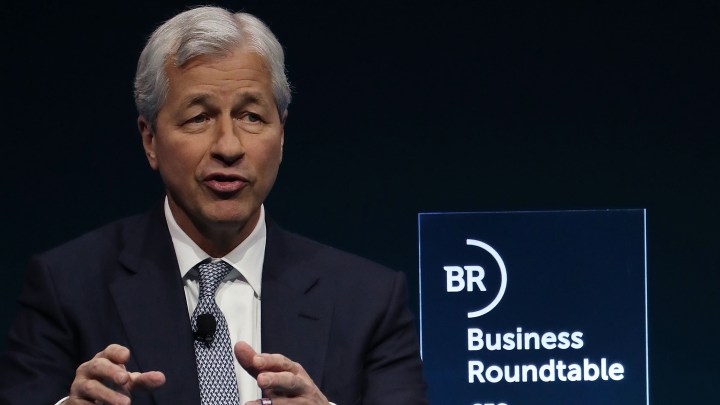 Chief executives from top companies announced efforts to build an economy that works for all Americans. The announcement came from the Business Roundtable, a group of nearly 200 CEOs led by Jamie Dimon, CEO of JPMorgan Chase. The group revised its mission statement to prioritize employees, communities and the environment, along with shareholders.

This shift comes after increased political and social criticism of wealth inequality and CEO pay as a growing number of companies rely on freelance and contract workers, who don’t receive employee benefits. Before now, the group’s mission was to maximize shareholder value, a philosophy that has guided the American corporations for decades.

But according to Margaret Blair, an economist at Vanderbilt University Law School, this change could bring back the practices of American corporations from last century, before shareholder primacy began to dominate boardrooms in the 1980s. Blair spoke with “Marketplace” host Kai Ryssdal about the implications of the change and how this could affect workers. The following is an edited transcript of their conversation.

Kai Ryssdal: First things first, I suppose. Were you surprised by this announcement today?

Margaret Blair: A little bit. It does seem to me that it’s an interesting development, indicating that there are certain people who are worried about the direction that capitalism has been going for the last 10 or 15 years or 20 years.

Ryssdal: And perhaps also, there’s some handwriting on the wall here. It’s become an issue in the campaign. This economy, as we all know, is changing. And I guess one does wonder where they’ve been that they’re just now catching up?

Blair: I think that’s right. The leading voices from the business community have been from the institutional investors, who have started to speak up and say, “Wait a minute, we’re in this for the long run. So we need you to still be in business that far out. We need to be paying attention to these long-run issues.”

Blair: Good question. One of the big problems is how to measure what they do. And I think one reason that the focus became about 30 years ago on share value is it’s very easy to measure, whereas a lot of the other ways that we have of measuring things are subject to manipulation and are subject to mismeasurement. And so we have to be very creative about coming up with ways of measuring things like sustainability, things like how you are taking care of your employees, those sorts of things.

Ryssdal: It has to be said that some of the companies on this list, not a few of them, anyway, are saying one thing today, but have very recently been doing another: buying back stocks and paying their CEOs many multiples of what average employees make. I mean, there’s a little bit of cognitive dissonance here.

Blair: They would love to have you believe that they’re doing the things that they claim that they’re doing. But I think the fact that they’re talking about it is different. That has changed. They’ve been denying their responsibility for these other sorts of goals for social and environmental goals in the past, and they’re starting to at least now speak up and say the right words.

Ryssdal: Well, so that gets to sort of the existential question: Is this a rethinking of capitalism in America?

Ryssdal: To that point about shareholder value being easy to measure, are there things you would be looking for to say, you know, what they actually meant that this time, they’re actually changing to more of a stakeholder value model?

Blair: That the fact that corporations have been shedding employees, they don’t want to be responsible for the benefits, they want to have a “just-in-time” workforce that they can call in when they need them and not have to pay them when they don’t need them — I will believe it when I start to see some significant changes in those trends.