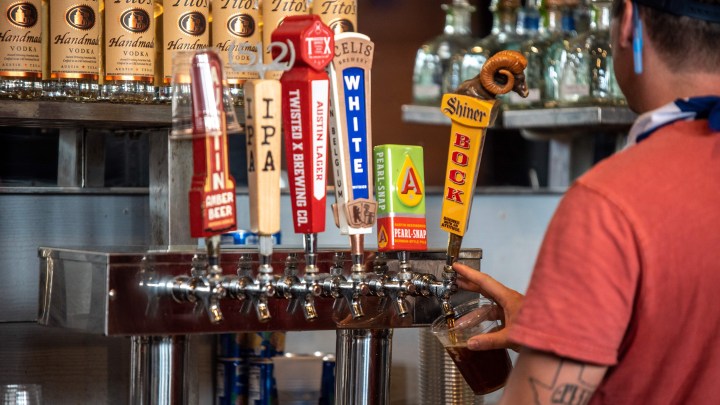 COPY
A bartender pours a beer in Austin, Texas. Supply chain issues, a poor crop year and the war in Ukraine have all contributed to higher barley prices. Sergio Flores/AFP via Getty Images

A bartender pours a beer in Austin, Texas. Supply chain issues, a poor crop year and the war in Ukraine have all contributed to higher barley prices. Sergio Flores/AFP via Getty Images
Listen Now

Since Russia began its invasion of Ukraine, a lot of products have been getting more expensive: gasoline, stainless steel and catalytic converters among them.

Now, you can add beer to that list. Russia and Ukraine are two of the world’s biggest barley exporters, and malted barley is the main ingredient in beer.

Bell’s Brewery in Kalamazoo, Michigan, traces its roots to the very beginning of the craft beer movement in the U.S. in the late ’70s and early ’80s.

“I’ve been running breweries for over 30 years. And the last few years have been the most challenging, full stop,” said John Mallett, the company’s vice president of operations.

One of the challenges is the price of barley, which was rising even before Russia’s invasion of Ukraine for a bunch of reasons.

“First among those: supply chain issues, you know, brought on by COVID. Secondarily, for barley, we did not have a good harvest last year at all. And that has manifested in prices at the farm gate, jumping up by upward of 50%,” Mallet said. And he knows his barley. He wrote a book a few years ago, “Malt: A Practical Guide from Field to Brewhouse.”

“It’s never a good thing when the number three and number four barley-exporting nations in the world go to war,” he said.

Barley, like wheat and oil, is a global commodity: When the price rises in one place, it rises everywhere. According to Bart Watson, chief economist at the Brewers Association, U.S. brewers aren’t directly buying a lot of Ukrainian or Russian barley.

“But those products do go into the global supply chain, do get used in the brewery supply chain, and so it’s kind of a perfect storm already and this is just another element that’s increasing the destruction of the storm,” Watson said.

Plus, barley is just one of the increasing costs brewers are dealing with. Aluminum for cans, steel for brewing kettles — those costs are up too. And that’s only going to mean one thing, said Garrett Nelson, senior equity analyst at CFRA: “Basically, they’re going to have to raise prices on beer, you know, pass those increased costs along to consumers in order to maintain their margins.”

Everyone along the supply chain has to maintain their margins.

According to Fergus Fitzgerald, production director at Adnams, a brewery on the east coast of England, more than the price of barley, the cost of energy is pushing the price of beer upward.

“Getting that beer to the pub — there’s an extra cost in there for the fuel. When you get to the pub, their energy costs are going up. So it’s the sort of accumulation of all those costs will have to be passed on,” Fitzgerald said.

Fitzgerald said Adnams will probably have to raise the prices of their beers come Christmas. He’s worried about driving customers to cheaper substitutes.

The key for brewers, especially smaller ones, is to be upfront with customers about exactly why they’re charging more for their beers, according to Ann Kronrod, an assistant professor of marketing at the University of Massachusetts, Lowell.

“Companies often shy away from transparency for different reasons. But there are many ways in which you can talk about price and actually gain customer trust,” Kronod said.

One way to do that, she said, is to talk about price in relation to value. So customers see businesses paying more for inputs — whether it’s barley or energy — as a way of ensuring great-tasting beer.