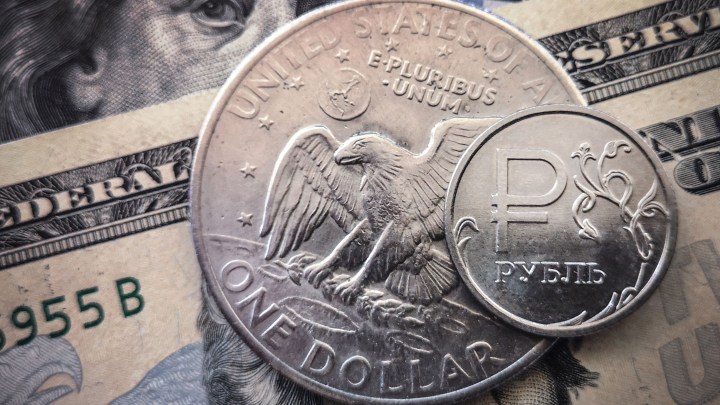 COPY
From the costs for weapons and tanks to food, the invasion of Ukraine is likely costing Russia more than it anticipated. AFP via Getty Images

From the costs for weapons and tanks to food, the invasion of Ukraine is likely costing Russia more than it anticipated. AFP via Getty Images
Listen Now

The longer Russia’s invasion of Ukraine drags on, the higher the actual cost of keeping the assault going.

Every day of the invasion, Russia’s military uses up a lot of materiel. So, it needs to replenish its supplies of weapons, tanks and missiles.

“But also, it is the supplies, it’s the logistics, it’s things like food for your forces as well,” said Vera Zakem, non-resident senior associate with the Center for Strategic and International Studies and a senior technology and policy advisor with the Institute for Security and Technology.

Overall, it’s difficult to tell how much Russia has spent so far on the invasion, but Zakem said it’s got to be more than Moscow expected. “Because it has been a sustained and protracted conflict, one that’s had pretty significant losses to Russia.”

That includes significant human losses. We don’t know how many casualties Russia has incurred so far, said Anatol Lieven, senior fellow with the Quincy Institute for Responsible Statecraft.

“But certainly, I mean, to judge by the number of senior officers who have been killed, Russian deaths must run into several thousand by now — with, of course, that implies tens of thousands wounded,” he said.

Russia has the resources to keep pushing. It can send more soldiers and supplies to the front lines and also reorient the Russian economy into a war economy, Lieven added.

“With extensive nationalizations, economic directives to private business to switch over to war production, possibly requisitions of food for the army.”

That could stimulate the Russian economy in the short run. But in the long run? Devoting more resources to the war effort will have its own costs, according to Robert Farley, senior lecturer at the Patterson School of Diplomacy and International Commerce at the University of Kentucky.

“Because it doesn’t create any kind of economic good in the same way that a car or a truck would, or a bridge or something along those lines,” he said.

While on the other hand, “tanks and bombers and fighters, the only thing they do is destroy. They may still be necessary for the national good, but they’re not productive from an economic point of view.”

The longer the war drags on, Farley said, the more Russia’s economy will suffer.