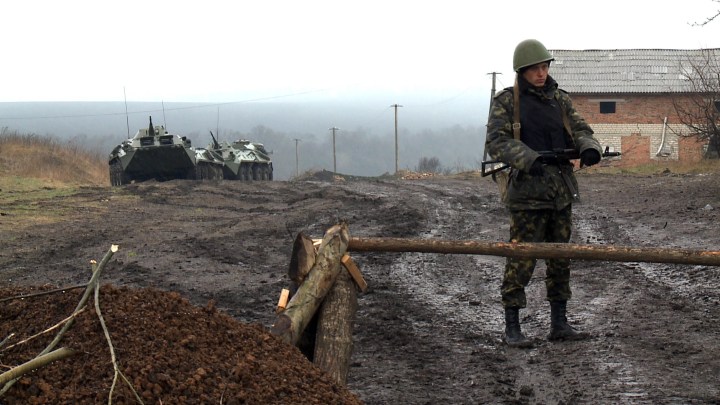 COPY
A Ukrainian soldier guards a road near the Russian border in April 2014, just weeks after Russia invaded and annexed Crimea. After the invasion, Ukraine rejected Russia’s industrial standards and opted for Europe’s instead. Robert Leslie/AFP via Getty Images

A Ukrainian soldier guards a road near the Russian border in April 2014, just weeks after Russia invaded and annexed Crimea. After the invasion, Ukraine rejected Russia’s industrial standards and opted for Europe’s instead. Robert Leslie/AFP via Getty Images
Listen Now

Russian President Vladimir Putin tries to justify his invasion of Ukraine with a lot of lies — Nazis in Ukraine, nuclear weapons in Ukraine and the idea that Ukraine has always been a part of Russia. But lurking in the background and left unsaid are reasons why Russia’s invasion could also be a matter of rubles and kopeks.

Ukraine represents a market of 44 million consumers, as well as a fair amount of manufacturing capacity. But the country has been moving its economy away from Russia’s — and turning toward Europe — since the first Russian invasion eight years ago. And one way Ukraine has been moving away from Russia has to do with industrial standards.

Industrial standards are important. In 1904, a fire erupted in Baltimore. Firefighters from Washington, D.C., drove there to help put it out, only to find that their hoses didn’t fit Baltimore hydrants.

“These folks traveled to Baltimore to help with the fire and couldn’t do a thing, at least not with the equipment that they brought,” said Tim Büthe, a professor at the Technical University of Munich and technology policy scholar at Duke University.

Countries need their parts and equipment to work together, the way fire hoses and fire hydrants do. That includes railroad axles and tracks, the voltage coming out of the wall and how much a product can tolerate, and the threading on nuts and bolts.

“[For] any screw that also requires a nut at the other end, there needs to be a fit between the threading on the screw and the treading on the nut,” Büthe said.

“Now, in more recent decades, that same issue has arisen on a global level, as we have moved from national to international, and by now, for many things, truly global markets,” Büthe said.

The International Organization for Standardization sets rules to ensure that a product made in one country works in another. In other words, international standards can be tools of globalization.

“The more of those standards can be harmonized, the easier it is to trade internationally,” said Johannes Moenius, professor of global business at the University of Redlands. “Standards — harmonized standards, in particular — foster competition and allow for more market entry into your local market.”

But not every country wants more competition in its local market. Moenius said Russia uses its standards to set up a roadblock for products from other countries.

“Everything has to be certified within the Russian system,” Moenius said. “And that is a quite substantial requirement because their standardization requirements are very far-reaching.”

And that doesn’t just keep products from other countries out of Russia.

“It’s also one way to sort of keep countries locked into its economic orbit,” said Mark Wu, a professor at Harvard Law School.

Several former Soviet states use Russia’s industrial standards, which creates a captive market for Russian goods. Plus, Wu said Russia can dangle its standards in front of less-developed economies that want a market for their products.

“[This is] to say, ‘Integrate this way towards us. You’re better off doing so. You’re going to be more competitive doing so. And we offer a sizable market where you can compete,’” Wu said.

In 2015, Russia formed an economic union with other former Soviet states, including Kazakhstan, Belarus and Armenia.

“Technical regulations and standards become one of the ways in which those countries, once they become part of this and are tied into that union, then have greater access to the Russian market,” Wu said.

But then there’s Ukraine. After Russia invaded the Crimean Peninsula in 2014, Ukraine rejected Russia’s industrial standards and opted to use Europe’s instead.

“Since the war started in 2014, we’ve really seen a de-linkage of the Ukrainian and Russian economies,” said Paul Stronski, senior fellow with the Russia and Eurasia Program at the Carnegie Endowment for International Peace.

“Ukraine traditionally was closely integrated in the Soviet economy, and then the Russian economy,” Stronski said. “The military and industrial complex of the two countries were highly integrated until just the last decade.”

In the meantime, Stronski said Ukraine has developed its energy and agriculture sectors, along with its machinery production and its information and technology sector.

And, along with Georgia and Moldova, Ukraine has been hawking its goods and services in Europe. “The European market is quite large and more robust than the Russian one,” Stronski said.

But if Russia is able to conquer Ukraine, it would add another captive market to its economic bloc.