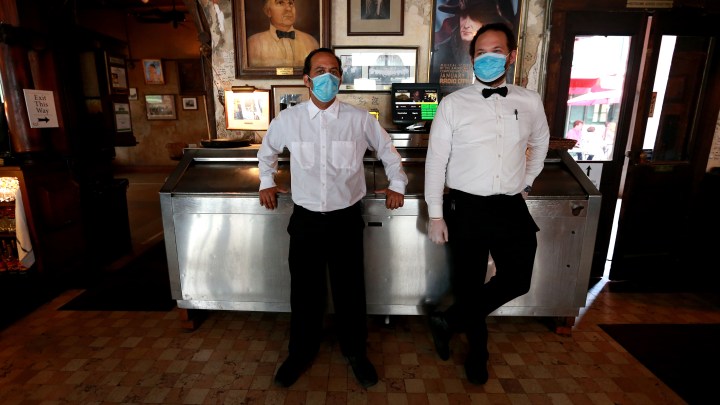 COPY
Wages for workers in service industries like catering and child care have gone up in the tight labor market. Sean Gardner/Getty Images

Wages for workers in service industries like catering and child care have gone up in the tight labor market. Sean Gardner/Getty Images
Listen Now

A lot of the inflation we’ve been seeing recently has been about the rising cost of goods, like groceries, furniture and cars. So far though, we haven’t heard as much about inflation where consumers spend about two-thirds of their money: the services sector.

Services were hit a lot harder by the pandemic and have taken longer to recover. But as the services sector recovers this year, we’re likely to see more inflation there, too.

Al Fresko is a small market near San Diego that sells food and food-related goods that owner Jennifer Niezgoda curates from around the world.

“We’ve got olive oils from Portugal, and wine from Mexico, and a lot of stuff from local makers here,” Niezgoda said.

Al Fresko also has a services business. It puts on events, like boutique gatherings at the market, private chef experiences and luxury beach picnics.

“We’ve been able to offer a lot more community-style stuff, which is great because for the last year and a half, we weren’t able to do that,” Niezgoda said.

Niezgoda said the goods she sells have been getting more expensive. But lately, she said costs are rising most on the services side. A big reason is the cost of staffing those local events.

“I used to pay more around minimum wage, and what we’re having to pay now is pretty high,” she said. “It’s way above minimum wage.”

It’s taken a while for hourly, services-sector jobs to start coming back, said Megan Greene, senior fellow at the Harvard Kennedy School and chief economist at the Kroll Institute. Now that they are coming back, companies are competing for labor, pushing wages up.

“And therefore, the companies operating in those areas are passing on the higher wages costs to the end user in the form of higher prices,” Greene said.

This isn’t only happening in the leisure and hospitality industry.

“Child care took a hard hit,” said Marcia St. Hilaire-Finn, who owns Bright Start Early Care & Preschool, which has three locations in Washington, D.C. “A lot of people left that industry to go do other things, or to just reevaluate their lives and what they want to do.”

St. Hilaire-Finn said demand for child care jumped this month, with omicron fading and people going back to work. But she’s only been able to fill about 20% of her open positions, in part because it’s hard to find the right people.

“We attracted a lot of people, but not all the people want to be in child care,” she said. “People are just looking for jobs. But for us, it has to be a passion.”

That means her prices are rising, too.

“We had to raise tuition by 10%,” St. Hilaire-Finn said. “And we had to raise it most recently again by 5% because it’s growing faster than we can keep up with the pace.”

It’s not just wages that are pushing up prices in the services sector.

Sherard Duvall runs video production company OTR Media Group in South Carolina. It does video shoots for clients all around the Southeast, which means Duvall has to rent a lot of trucks and minivans to haul his crews and equipment.

“And man, the prices of renting vehicles has gone so far up,” Duvall said.

So has the cost of hotel rooms. While the costs of those services are rising, they’re a pretty small slice of his budget.

“When you look at the overall cost of the production, it’s maybe one or two line items on a sheet that might have 30-40 line items,” Duvall said.

Many of those other line items are not getting more expensive. For instance, he said his production budgets for food, gasoline and wages have remained pretty constant.

As a result, Duvall said he hasn’t had to raise his prices all that much so far. “Like, I don’t think our clients have the same sticker shock as I did when I looked at those rental car prices.”

But if hotel and rental car prices keep going up, Duvall said his will, too.