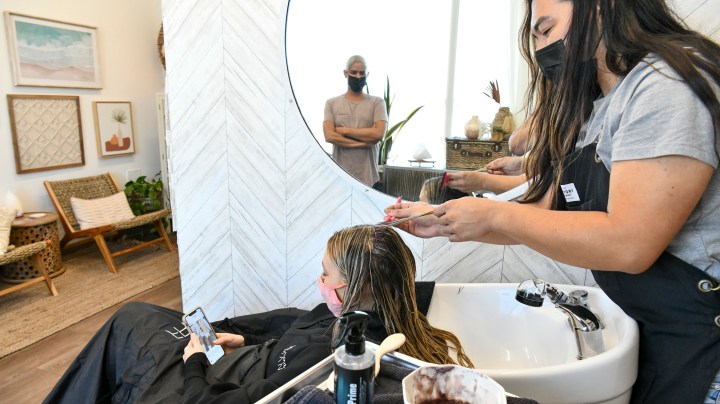 COPY
While rising prices for services, like styling hair, worry economists, prices for some goods may be dipping. Rodin Eckenroth/Getty Images

While rising prices for services, like styling hair, worry economists, prices for some goods may be dipping. Rodin Eckenroth/Getty Images
Listen Now

It’s hard to imagine, but until recently the release of the consumer price index — the most commonly used measure of inflation — used to be kind of a snoozer. Every month, the federal Bureau of Labor Statistics would publish the numbers, inflation would usually be in the 1% or 2% annual range and the business world would go about its business.

Now it feels like the whole economy waits for the CPI with bated breath. The next release will come out Wednesday morning, when the federal government will give us an idea of how much prices changed in the year that terminated last month.

Just to jog your memory, the “headline” inflation rate — which includes volatile energy and food prices and will be making actual headlines Wednesday — was 9.1% in June. Which is … not good.

“That was the most worried I’ve been about inflation,” said Betsey Stevenson, an economist at the University of Michigan.

She’s particularly troubled by the consistent rise in service prices and will be looking for those in the numbers. “So medical services, child care services, haircuts. It indicates inflation that might be not likely to fix itself.”

And harder for the Federal Reserve to fix with interest rate hikes. But there may be bright spots in Wednesday’s report. Gasoline prices dipped in July, and some commodities got cheaper. There are also indications that the cost of goods is dropping, at least online, according to Vivek Pandya, who tracks e-commerce for Adobe.

“We’re now starting to see prices for major categories like electronics and apparel start to come down, and that deflation is a first for us in quite some time.”

Retailers are discounting all that excess patio furniture and other pandemic inventory stuck in their warehouses, Pandya said. But even if the fresh CPI numbers are lower than expected, we can’t assume inflation has finally been whipped.

“We’ve been head-faked three or four times in the last year or so on inflation and the idea of whether or not it has peaked,” said Greg McBride, chief financial analyst with Bankrate.

As for the number of times Marketplace mentions inflation … yeah, that may not have peaked either.