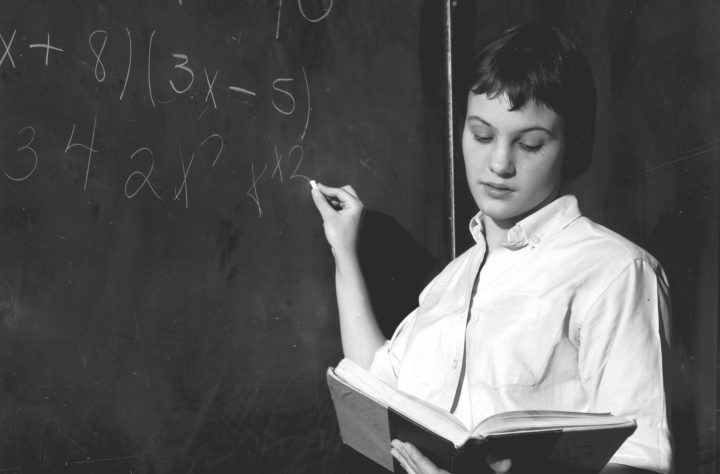 COPY
You don't need a complicated math problem to measure inflation; the CPI and PCE will do. Three Lions/Getty Images
Kai Explains

You don't need a complicated math problem to measure inflation; the CPI and PCE will do. Three Lions/Getty Images
Listen Now

Look. The economy is complicated. We know that sometimes, try though we might to help you understand it, we throw business and economics at you pretty fast. That’s why we’re launching a new series where we slow all the way down and go back to basics. It’s called “Kai Explains.” Our first installment is something you hear about all the time — inflation.

Inflation is a key measurement of where the economy might be headed, how consumers are doing day-to-day and it’s what the Federal Reserve chair, Jay Powell and his counterparts spend so much time trying to keep stable. So what are we talking about when we mention inflation? Here are four ways to measure it:

Inflation is an increase in the price of goods or services. The CPI, is “sort of the headline measure of inflation in the U.S. economy” said Erica Groshen a visiting scholar at Cornell University and former commissioner of the Bureau of Labor Statistics, the organization that calculates the CPI.

That market basket of goods and services includes a wide range of items such as food, televisions, prescription drugs, rent, gasoline and college tuition.

“When people use the CPI, what they’re often using is the change in that index, which could be defined as inflation” said Reed.

When the BLS puts out the CPI each month, there’s a headline number that tells you how much the prices of those 80,000 items in the basket have gone up or down. But there is another number — that’s sometimes called the “core” number — that intentionally leaves out food and energy prices because they tend to bounce around a lot. “Increases in those particular goods may not reflect long term pressures,” said Groshen. “They may just be reflecting weather patterns or things like that.”

PCE is sometimes referred to as “consumer spending.” It’s calculated by the Bureau of Economic Analysis, the same organization that calculates Gross Domestic Product, or GDP.

The PCE actually uses some information from the CPI as inputs. It just uses them a little bit differently. David Wasshausen, chief of the national income and wealth division at the Bureau of Economic Analysis said the CPI and the PCE “are largely consistent with each other” and tend to “tell the same story from period to period.”

In 2000, the Federal Reserve announced it would switch its focus from the CPI to the PCE in setting its inflation target.

“One reason the Fed likes to look at that price is because it can be fit in that GDP framework,” said Wasshausen. “And so they can look at what is the economy doing? Is it growing or not? Is it hitting a target growth? And then let’s look very specifically at those prices that are paid by consumers in that same exact framework and see how that gauges our target inflation.”

Just like the Bureau of Labor Statistics publishes a CPI number excluding food and energy, the Bureau of Economic Analysis publishes the PCE number excluding food and energy. This “core” PCE number is what the Federal Reserve uses to set its inflation target. “That allows you to see a sort of basic trend of what inflation is doing in the consumer sector,” said Wasshausen.