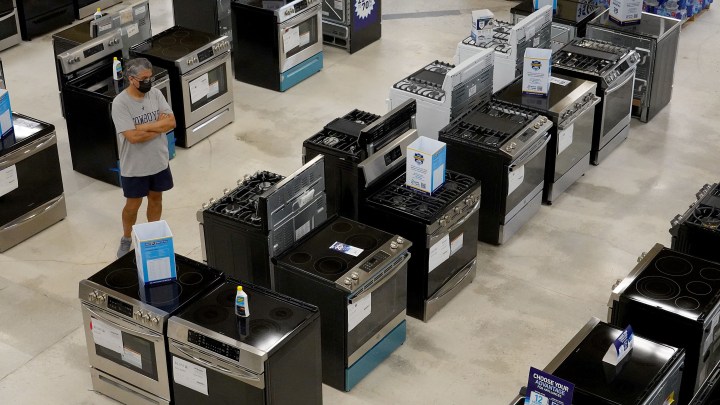 COPY
The prices of things that tend to be volatile, like energy, may dip when the factors that cause inflation ease. But goods like clothing or home appliances? Probably not so much. Joe Raedle/Getty Images

The prices of things that tend to be volatile, like energy, may dip when the factors that cause inflation ease. But goods like clothing or home appliances? Probably not so much. Joe Raedle/Getty Images
Listen Now

The consumer price index for January comes out Thursday, and it’s probably going to be another red alarm reading.

December, as you and your pocketbook might remember, saw the largest year-over-year jump since 1982 at 7%. As we have heard, some of the things driving up prices are issues with supply chains or shipping or problems related to the pandemic. Which raises a question: When those problems get resolved, will prices come back down?

The answer is … no. For most things — like meals at restaurants, clothes, or a new washer and dryer — prices are not going to come back down.

“When somebody sees that [for] their business the costs are too high, it’s become unprofitable — they’re pretty quick to recognize that and increase prices,” said Laura Veldkamp, a professor of finance at Columbia Business School. “But rarely does a person say, ‘Gosh, I’m making too much money. I better reduce those prices to solve that problem.'”

Sometimes businesses raise prices because they have to as their own costs rise. That’s definitely been happening.

“Most small-business owners are having to absorb those increased costs in compensation costs for their supplies and inventory products,” said Holly Wade, who directs research for the National Federation of Independent Business.

But there’s also inflation driven by droughts of supply and floods of demand; we have both right now. The chip shortage, for example, has meant that only so many cars can be made. We’ve had our demand surges for things like toilet paper and homes. And generally, people are throwing their money at random stuff instead of vacations.

Stimulus payments and savings contributed too, according to Ricardo Reis, a professor of economics at the London School of Economics.

“Many households, having saved those stimulus payments, are now winding down those savings by increasing their consumption and pushing prices up.”

​”Given that demand was higher too, it’s not clear that you will have some excess supply coming down the road,” he said.

There are some areas in which prices actually might come down, Brunnermeier said. “So it might be in certain sectors where prices really exploded.”

​”Energy prices are much more volatile and not so sticky,” Brunnermeier said. “They come up and down all the time.”