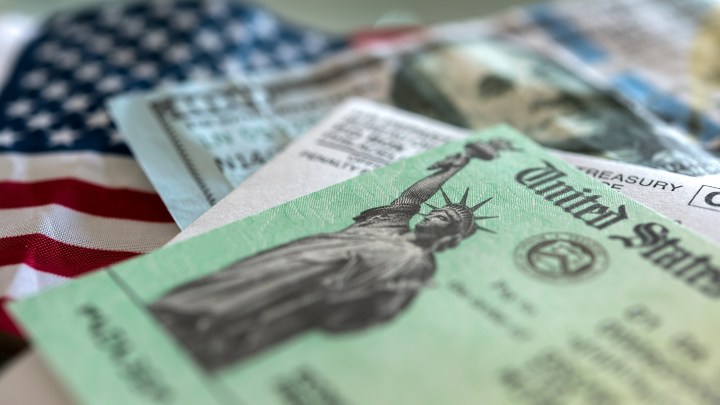 COPY
Many consumers plan to save a big part of their relief payment instead of quickly funneling it into the economy. Chuyn via Getty Images

Many consumers plan to save a big part of their relief payment instead of quickly funneling it into the economy. Chuyn via Getty Images
Listen Now

The Federal Reserve Bank of New York released a study Wednesday on how people are spending — or not spending — their relief checks.

The report found that the consumers it surveyed who’ve already received their third relief checks are mostly hanging on to the money, just like they did with the first and second payments. It said that consumers are planning to spend only a quarter of the most recent check, and most of that will be spent on essentials.

Jason Calizar, an eighth-grade teacher who lives near Los Angeles, explained why he’s not opening his wallet, saying: “We’re savers.”

He said that before the pandemic, he, his wife and teenage son would go out to eat once or twice a month. But now, they will not be using any of their stimulus money for that. In fact, he doesn’t think they’ll set foot in a restaurant until next year. “We’ve spent the better part of 13 months just avoiding indoors, or people, strangers. It would just be a big hurdle to get over,” he said.

“The confidence to go out and spend on services is very directly related to the progress we’re making on the vaccinations,” she observed.

Bostjancic thinks we’ll make enough progress for consumer spending to jump about 3.5% over the next few months. Other economists are not quite as optimistic, like Joseph Minarik, senior vice president of the Committee for Economic Development of the Conference Board.

He said, “The people who work in hotels or in transportation, where getting up to full capacity is going to take some time — those folks are going to continue to hold back in terms of their spending.”

Minarik added that even some people who have jobs are worried they’ll get a pink slip. And economic growth will not recover without them, since roughly 70% of the U.S. economy is consumer spending.