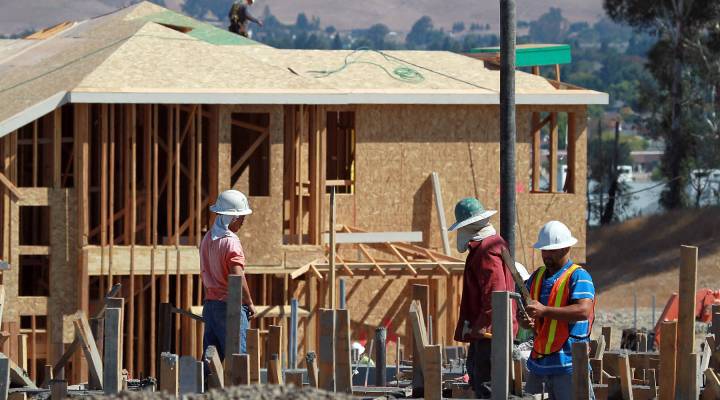 COPY
In additing to a shortage of supplies and labor, there's now a shortage of lots for home builders. Justin Sullivan/Getty Images

In additing to a shortage of supplies and labor, there's now a shortage of lots for home builders. Justin Sullivan/Getty Images
Listen Now

If you follow the housing market at any level, you know we’re in the midst of a severe shortage of homes for sale. That’s one reason the S&P CoreLogic Case-Shiller National Home Price Index, out this week, had its biggest increase ever. Prices were up 14.6% in April compared to a year earlier. Rents are climbing, too, nationally. But estimates of just how many houses we need to meet demand vary widely, from just over a million housing units to more than 5 million.

There are many reasons we’re in a housing crunch. Among them are the overbuilding before the Great Recession which led many builders to fold when the market crashed. Now, there are higher costs and shortages of land and skilled labor.

“You think about the carpenters, welders, plumbers, who are required to build some of these properties, we’ve had a shortage of them for quite some time,” said Raphael Bostic, president of the Federal Reserve Bank of Atlanta.

Bostic was speaking at an event on Thursday, “What Will it Take to Build 10 Million Units of Housing?”, hosted by Habitat for Humanity. The title was meant to be provocative, said Habitat CEO Jonathan Reckford. “It was to signal that, look, we have a massive housing shortage,” Reckford said. “We’ve got to think differently about how opening up supply, because this is a full crisis now.”

Right now, builders are only finishing about 1.5 million housing units a year. The National Association of Realtors says that leaves us short about 5.5 million, based on historical building averages. Freddie Mac put the shortfall at 3.8 million. Sam Khater, Freddie Mac chief economist, said his team looked at population growth, household formation, the need to replace aging homes and demand for second homes.

According to Khater, “many of these other approaches use different sources of data, different assumptions, different methodologies — but I think the one thing they all agree on is we have a large shortage.”

Others say the shortage is much smaller. Brad Dillman, chief economist with the multifamily unit builder Cortland, estimates we’re short just over one million housing units, which would take four or five years to catch up. “By my estimate, the absolute last thing you’d want to do would be to launch an expansionary housing policy right now,” he said.

Dillman warned that doing too much to stimulate building could lead to a glut, which is part of what got us into this mess in the first place.