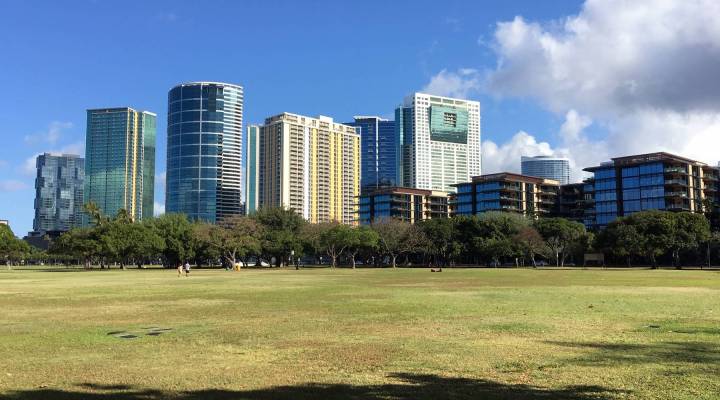 There’s an old joke in Hawaii that state bird should be the crane — as in, the construction crane. A quick look around Honolulu’s Ala Moana neighborhood shows why: High-rise cranes dot the skyline, each one working on a new building. Most streets have at least a couple of active construction sites, and almost all of them are condo developments.

Despite all that building activity, Honolulu has some of the highest housing prices in the country. The median price of single family home is around $800,000. For a condo, it’s more than $400,000. Only two markets in the country have higher housing prices, according to analysis by University of Hawaii economist Sumner La Croix: San Francisco and San Jose.

Hawaii and Honolulu laws require most new developments to set aside a certain percentage of units as affordable rental housing, but it’s not enough. In five years, Honolulu will still need thousands of additional new units. That has elected officials looking for other solutions to the problem, and some think they’ve found one in Singapore.

After World War Two, a series of fires destroyed much of Singapore’s housing stock, leaving thousands of people homeless. The government stepped in with a massive public housing program.

These days, the vast majority of Singaporeans live in flats built by the government — according to historian Ho Chi Tim, between 80% and 85% of the island nation’s 5.6 million residents. Singapore residents can purchase a two-bedroom flat on the resale market for less than $300,000. The flats are built under government contracts and sold by a government agency called the Housing Development Board. Hawaii State Senator Stanley Chang wants to replicate that program in the Aloha State.

“I think it’s important that if we’re going to try to solve a problem, that we go to the successful examples of where that problem has been solved,” he said.

Singapore fits five times the population of the island of Oahu, where Honolulu is located, into half the land area. In both cities, the median household income is about the same, just over $80,000. Chang’s plan is called Affordable Locally Owned Homes for All, or ALOHA. It would develop high-density housing on state owned land in the city, with units sold at cost to Hawaii residents who own no other property and commit to being the owner-occupants.

The units could be passed down to children or sold, and the state would tax 75% of resale profits. Initial construction costs would be funded by a bond issue or general state funds. Chang’s goal is to bring units to market for around $300,000, which he says would cover the cost of construction. But economist Sumner La Croix is skeptical.

The Hawaii legislature has allocated $150,000 to study Chang’s proposal before taking it up again next year.