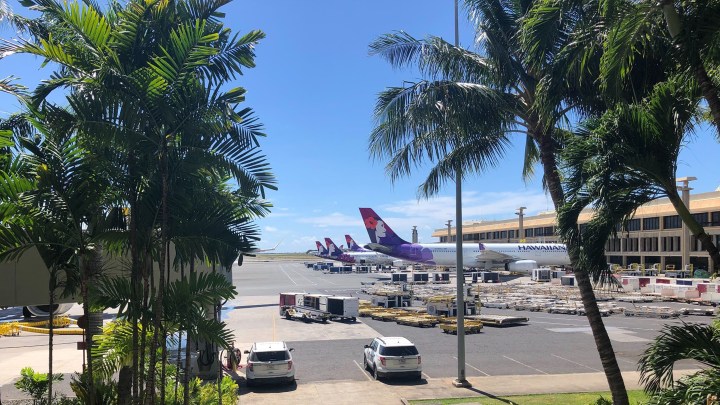 COPY
Hawaiian Airlines jets outside Daniel K. Inouye International Airport in Honolulu. Hawaii has seen a more than 90% reduction in the number of arriving air travelers since the start of the pandemic. Ryan Finnerty
COVID-19

Hawaiian Airlines jets outside Daniel K. Inouye International Airport in Honolulu. Hawaii has seen a more than 90% reduction in the number of arriving air travelers since the start of the pandemic. Ryan Finnerty
Listen Now

Hawaii has the highest unemployment rate in the country. The state’s tourism-heavy economy took a major hit from the reduction in travel because of the COVID-19 pandemic.

But now, Hawaii is trying to lure visitors back by allowing travelers who test negative for COVID-19 to skip a mandatory quarantine.

Since mid-October, people have started arriving in greater numbers again at Honolulu’s airport.

People like Nikki and Jeris Rue from Omaha, Nebraska. “We actually ended up taking two tests because we wanted to make sure that we got the results back. They both came back in 48 hours,” said Nikki Rue.

Officials are hoping visitors like the Rues will change Hawaii’s economic fortunes.

The state depends on its nearly $18 billion tourism industry, that was severely depressed at the start of the pandemic.

On the first day of the new system around 8,000 people arrived in Hawaii  — a substantial increase from recent months, but still less than one-third of pre-pandemic levels.

Hawaiian and several other airlines are connecting passengers with test providers to help visitors comply with the new rules.

Passengers, or their health insurers, have to pay for the test, which can cost more than $200.

Hawaii is moving to further expand the travel testing program. Governor David Ige recently announced the state had reached an agreement with the Government of Japan to include its citizens in the new plan.

“Please feel free to safely visit our islands. We are ready and delighted to welcome you back,” he said in his announcement.

Japan is Hawaii’s most important tourism market after the mainland U.S. – 1.5 million Japanese citizens visited the state in 2019. 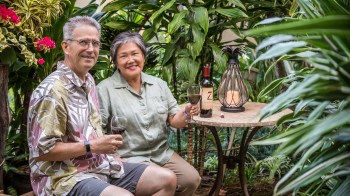 Not the usual crowd for the holidays in Hawaii