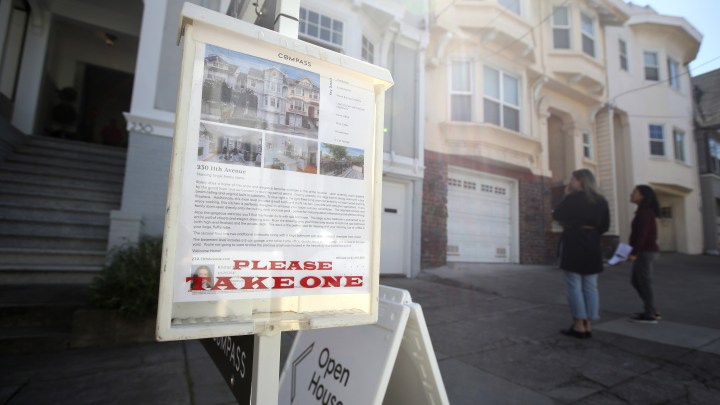 COPY
People look at a San Francisco home during an open house in April 2019. Following a dramatic jump in housing prices over the past year, a California bill that has passed both chambers seeks to effectively end single-family-only zoning. Justin Sullivan via Getty Images

People look at a San Francisco home during an open house in April 2019. Following a dramatic jump in housing prices over the past year, a California bill that has passed both chambers seeks to effectively end single-family-only zoning. Justin Sullivan via Getty Images
Listen Now

California housing costs were astronomical before COVID-19. Now, they’re just wild. The median price of a home sold last month reached $811,000, up more than 20% from just a year ago.

California lawmakers are trying to spur the construction of smaller homes to help ease the state’s affordability crunch. A bill that has cleared both chambers of the state Legislature would make California the second state in the country to effectively end single-family-only zoning. While Gov. Gavin Newsom has yet to say publicly whether he will sign or veto the bill, he has supported similar legislation in the past.

The proposal would allow California homeowners to convert single-family homes to duplexes and — in some instances — create four housing units where only one was legally allowed.

With over 50% of the state’s residential land zoned exclusively for single-family homes, the bill could transform what housing is allowed to be built where throughout the state. But on its own, it may not make a transformative dent in prices.

“The implications for California’s housing supply are significant, but it certainly won’t actually solve the crisis itself,” said David Garcia, policy director for the UC Berkeley Terner Center for Housing Innovation. “We need to do a lot of other things to make up for the housing deficit.”

A UC Berkeley analysis found the proposal could yield 700,000 new housing units in ideal market conditions. That’s nothing to sneeze at, but it’s well short of the millions experts say the state needs. Those new units also won’t materialize overnight.

“It takes a lot of time to develop and construct these kinds of units, especially because they’re going to be built by homeowners themselves,” Garcia said.

The state of Oregon and the city of Minneapolis passed similar measures in recent years. It’s still early to judge the results, but so far, the duplex revolution hasn’t really materialized yet.

“In Minneapolis, it’s been in place for a little over a year now and the number of permits that were pulled for duplexes and triplexes was very, very small,” said Salim Furth, senior research fellow at the Mercatus Center at George Mason University.

The California proposal offers a bit more flexibility for building more units, Furth said, and argues single-family-only zoning is a major barrier to building out of the country’s housing crisis. But he cautions policymakers to look at other barriers to new housing as well, like limits on building heights and on-site parking requirements.

“Waiting for approvals, going through the environmental quality reviews — all of those things are major barriers to housing construction,” Furth said.

And that’s something to keep in mind while other states and cities across the country consider zoning reforms.