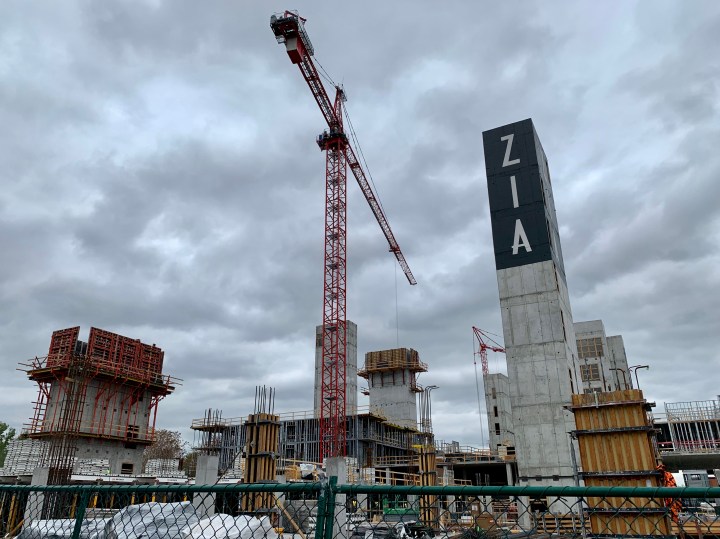 COPY
A new development in Denver will feature 120 condos, at an average price of $440,000. Amy Scott/Marketplace

A new development in Denver will feature 120 condos, at an average price of $440,000. Amy Scott/Marketplace
Listen Now

Workers had just finished their lunch break at a massive construction site in Denver’s Sunnyside neighborhood, when a concrete mixing truck arrived. They got right to work, attaching a huge bucket to a crane and then guiding the concrete down a funnel into the bucket, which was hoisted to the second floor — or what will become the second the floor — of an eight-story building.

The building will be part of the future Zia Sunnyside, a city block’s worth of apartments, condos and retail space, with a $116 million price tag. The complex will include a rooftop sky lounge and will feature 360-degree views of the Front Range and downtown Denver. A pedestrian bridge will connect residents to a nearby light rail station.

“They also have access to all of the other amenities on site, like the swimming pool, the spa, the club rooms,” said Tim Walsh, CEO of Confluence Companies, the developer and property manager. There will also be a co-working space and a yoga studio.

Given the demand for more affordable housing in this country, you’d think there would be a lot of projects like this.

“Historically, newly built condos have been a source of entry-level housing,” said Robert Dietz, chief economist of the National Association of Home Builders. But there aren’t a lot of Zia Sunnysides going up. Nationally, builders added only 24,000 new condo units over the past year, compared to 60,000 to 70,000 a decade ago. “On the new construction side, this is just one part of the industry that never really recovered after the Great Recession,” Dietz said.

One big reason: Condos are more expensive and complicated to build than apartments. Materials have to meet higher standards, and financing is harder to get. Insurance costs are also greater because of the risk of lawsuits over construction defects. Builders can make more money with apartments.

“Right now about 96% of multifamily construction is built for rent,” Dietz said. “That compares to about a 80% historic share.”

In Colorado, lawmakers passed legislation two years ago aimed at boosting the condo market by making it harder for homeowners’ associations to sue developers over construction issues. Walsh said the change, as well as his ability to purchase lower-priced industrial land, made the math work for Zia.

“I think you’re going to see more and more condos,” he said. “Plus, with the economy doing so well, there’s a lot of equity out there to invest in in a condo in a downtown or urban core.”

But condos also have an image problem with some potential buyers, who worry their investment won’t pay off.

“Part of the reason for a lack of demand for condos is that perception that, well, people don’t really want this, or a family can’t live in it,” said Allison Arieff, with the urban policy think tank SPUR in San Francisco. Arieff has argued on behalf of the condo as a more sustainable alternative to larger single-family houses.

More buyers are turning to townhouses, which are still more affordable than single-family homes but have that coveted front door. But realtors say condos could get a lift from two types of buyers.

“I call it my bookends,” said Denver broker Allie Carlson, with West and Main Homes. At one end of the shelf are the young professionals wanting a foothold in the market; at the other are empty nesters looking to downsize. “They’re interested in the urban lifestyle downtown, and they want to offload their big house down in the suburbs,” she said.

Charles and Bonnie Goldburg, both retired lawyers, recently traded their four-bedroom farmhouse on Long Island, New York, for a loft in downtown Denver to be closer to their daughter.

“We wanted a place with public transportation, we wanted a place which was walkable,” Charles said. “The other advantage that Denver has, from our perspective, is culture.” (That’s right. A New Yorker said Denver has culture.) Another plus of condo living, he said: “I was glad not to do any more snow shoveling.”