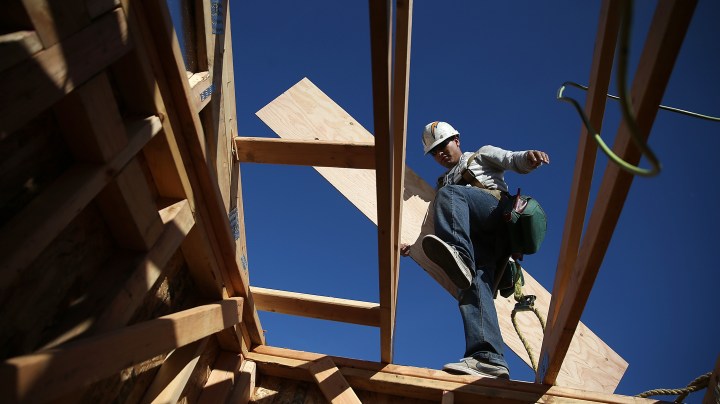 COPY
A construction worker carries lumber as he builds a new home in Petaluma, California, in 2015. Justin Sullivan/Getty Images

A construction worker carries lumber as he builds a new home in Petaluma, California, in 2015. Justin Sullivan/Getty Images
Listen Now

It’s been more than a decade since the housing market crashed, and the construction industry still isn’t turning out enough new homes to meet demand. That’s one big takeaway from the 32nd annual State of the Nation’s Housing report, published Tuesday by Harvard University’s Joint Center for Housing Studies.

Even as the economy and wages have grown and Americans are forming new households at a more normal rate, “we’re still only building 1.2 million new homes a year,” said Chris Herbert, the center’s managing director. That’s barely keeping up with new households. Given the need to replace aging buildings, demand for second homes and geographic shifts in population, “we should be producing about 1.5 or 1.6 million homes a year,” he said.

So why isn’t that happening? Builders blame higher costs for materials and land, and a shortage of labor. Many workers left the industry during the downturn and never came back, said Danushka Nanayakkara-Skillington, assistant vice president for forecasting and analysis with the National Association of Home Builders.

“At the same time, young people are not interested in working in a construction trade,” she said. Neither are women, who account for only 9% of construction workers. “Finally, the immigration crackdown has also choked off new labor supply,” she said.

The shortage of new housing is part of what’s pushing up prices for housing in general. And when new homes are built, they tend to be at the higher — more profitable — end of the market. Although construction of rental housing has been stronger, “rents are continuing to rise faster than incomes, so that means that people who are working out there with full-time jobs, making [a] decent living, are struggling to find housing that they can afford, ” Herbert said. “Affordable” is typically defined as costing no more than 30% of household income. The report found that almost half of renters are spending more than that. African American and Hispanic renters are more likely to be in that bind.

Rent is eating up the budgets of more older adults, too, leaving little for other necessities.

“The lowest-income older adults who are spending the most of their income for rent are spending 44% less on food and 70% less on health care,” said Linda Couch, vice president for housing policy with LeadingAge, which represents nonprofit providers of senior housing.

The solution, advocates say, is no surprise: More housing, but especially at the lower end.