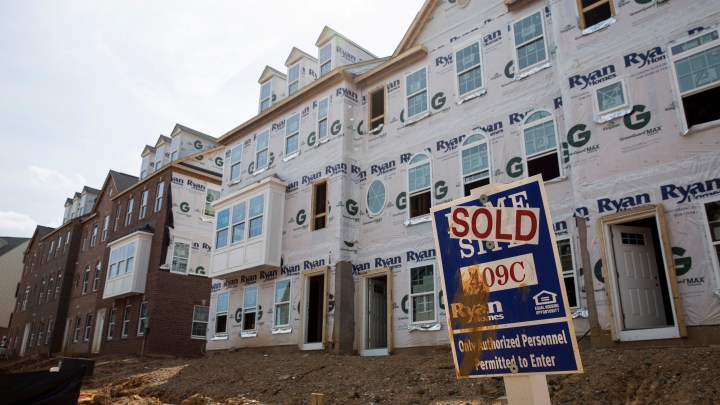 COPY
Slowed construction of affordable housing over the past two decades has contributed to a nationwide shortage of dwellings. Drew Angerer via Getty Images
Real estate

Slowed construction of affordable housing over the past two decades has contributed to a nationwide shortage of dwellings. Drew Angerer via Getty Images
Listen Now

A report out Wednesday from the National Association of Realtors says the country is short about 6.8 million housing units.

One big reason is that the construction of new housing — especially housing that’s affordably priced, for buyers and renters — has slowed in the last 20 years.

“The short story is that we simply haven’t been producing enough housing,” said Daniel McCue, with the Joint Center for Housing Studies at Harvard.

McCue said that was especially true during and after the Great Recession, when construction of houses and apartments dropped way off. And since then?

“The housing that we have been producing has been focused on the high end,” McCue said, rather than on smaller and medium-sized homes.

Another lasting effect of the Great Recession is that fewer people are working in construction, according to Jenny Schuetz at the Brookings Institution.

“There was kind of a generation of people who would have gone into carpentry and plumbing and become electricians, who just didn’t go into that because construction shut down,” she said.

Now it’s taking a while to build that labor force back up. There are also fewer places to build new housing these days, Schuetz said — at least in the areas where people want to live.

“We’ve seen an increasing interest of people living closer into city centers, particularly in a handful of metro areas that have really hot labor markets. But those are places that have made it very difficult to build new housing.”

That’s because many of those markets have strict zoning regulations that only allow single-family homes or a certain level of density that’s already been reached.

And on the demand side, a lot more people are looking to buy, Schuetz said. Millennials are getting married, having kids and making more money, “so you’ve got this huge generation that’s suddenly ready to buy homes and expand the amount of space they’re living in. And the flip side of that is that baby boomers are staying in their homes longer.”

Add all that up? There just isn’t enough housing, new or old, to go around.