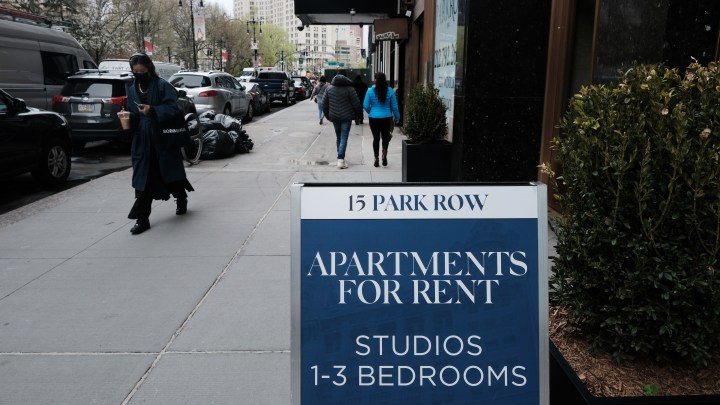 COPY
Millennials are staying in their apartments for longer than they would have a decade ago, likely due to the high cost of first-time homes. Spencer Platt via Getty Images

Millennials are staying in their apartments for longer than they would have a decade ago, likely due to the high cost of first-time homes. Spencer Platt via Getty Images
Listen Now

Looks like there’s an acceleration coming in residential real estate.

The National Association of Realtors reported on Monday that pending home sales were up 7.5% in October. That’s seen as a leading indicator of home sales that’ll close in 30 to 60 days. The group says it appears — despite very tight inventory of homes for sale — would-be buyers are trying to lock in sales earlier rather than later, as rents rise along with home prices.

But those rising home prices appear to be keeping millennial buyers on the sidelines.

The apartment-search website RentCafe analyzed rental applications nationwide and found that those aged between 25 and 40 are sticking with their leases longer than they would have a decade ago.

“The millennials who are aging, who would typically be moving into homeownership, have the difficulty — as we well know — about affordable housing and housing in general,” said Doug Ressler, who tracks data at RentCafe’s parent company, Yardi.

In a housing market with little inventory and prices going through the roof, first-time buyers are routinely outbid, Ressler said.

They’re also prioritizing other financial work, according to Lawrence Yun at the National Association of Realtors. “With record-high student debt — a deterrent to home-buying — people want to pay off a major debt obligation before considering buying a home,” Yun said.

If millennials want to find more affordable homes to try to buy, Robert Dietz at the National Association of Home Builders said they might need to turn away from expensive coastal urban markets and look in the South, where land is cheaper and zoning is easier.

“Whether it’s Texas or Florida, the Carolinas, you see a high-volume home construction and a relatively greater emphasis on entry-level,” Dietz said.

Builders are putting up a lot of townhouses in dense urban areas now, Dietz added. And that might be a more affordable option than buying a single-family home in the suburbs.

Demand for homes has been hampered by short supply