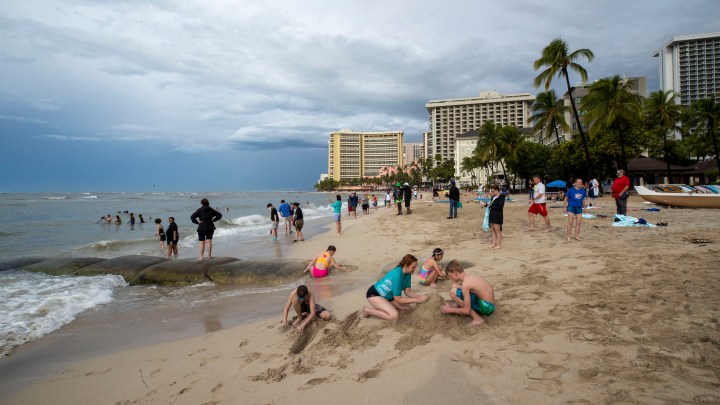 COPY
States that rely on tourism, like Hawaii, were among the hardest hit economically by COVID-19 but have had strong rebounds. Above, beachgoers in Honolulu. Eugene Tanner/AFP via Getty Images

States that rely on tourism, like Hawaii, were among the hardest hit economically by COVID-19 but have had strong rebounds. Above, beachgoers in Honolulu. Eugene Tanner/AFP via Getty Images
Listen Now

Wednesday we received more evidence of just how hot the job market is right now. More than 800,000 people nationwide got new jobs in the private sector last month, according to data from payroll-processing firm ADP.

That’s the most since May. To be fair, the numbers predate the current omicron infection wave. And while that’s a nationwide stat, the hiring isn’t happening at the same pace everywhere in the country.

A lot of hiring is going on in all sorts of industries these days.

“However, some states are experiencing much stronger recoveries than others,” said Mike Maciag, a researcher at the Pew Charitable Trusts. “Generally speaking, states with economies more tied to tourism or other industries upended by the pandemic suffered more severe job losses and have had much slower recoveries. Hawaii and Nevada really stand out, as do coastal states.”

Now, a lot of those states are the ones seeing the most hiring. Between November 2020 and November 2021, Hawaii had the biggest drop in unemployment rate, according to the Bureau of Labor Statistics.

“It’s this bounce-back effect, that the places that were hit the hardest are going to be the ones that we’re going to be seeing the strongest growth, because they fell the most, so they have the most to gain,” he said.

Other states, including many in the Midwest and South, aren’t seeing as much hiring now because they didn’t lose as many jobs in the first place. They also reopened sooner, said Andrew Stettner at the Century Foundation.

“The general trend had been that those states that were more cautious and aggressive in COVID mitigation efforts fared worse in terms of their labor market recovery,” he said.

But Stettner said that’s started to change in the last few months. “Where I saw more of those discrepancies before between the South and the North and the West, I see more of a convergence, you know, maybe more of a national recovery at this stage.”

The job market will continue to go up and down in different places along with the ebb and flow of the virus, but, Stettner said, a lot of the hardest-hit areas are getting closer to normal.