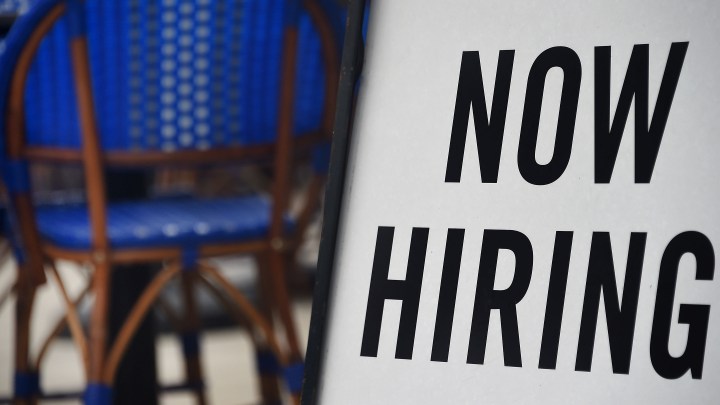 COPY
The manufacturing and construction sectors have done pretty well throughout the pandemic, but But, jobs in travel, hotels and restaurants are still way down. Olivier Douliery/AFP via Getty Images
COVID & Unemployment

The manufacturing and construction sectors have done pretty well throughout the pandemic, but But, jobs in travel, hotels and restaurants are still way down. Olivier Douliery/AFP via Getty Images
Listen Now

The economic recovery flashed green in late spring and early summer as much of the country emerged from pandemic shelter-at-home orders and businesses reopened.

But the restoration of jobs, and the fall in unemployment, have slowed since that early rebound from the first wave of COVID-19 shutdowns. And there are some warning signs flashing yellow now as we head into the end of the year. The most recent report Friday from the Labor Department said the unemployment rate fell to 6.9% from 7.9% in September. But eight months after the virus struck the United States, the economy still has recovered barely half the 22 million jobs that were lost to the pandemic.

The economy, which had rebounded sharply in the July-September quarter as businesses reopened from virus-related shutdowns, is now expanding more slowly.

This recession is not like most others, said Dean Baker at the Center for Economic and Policy Research.

In the Great Recession for example, manufacturing and construction jobs were hit hard. This time those sectors have done pretty well.

But, jobs in travel, hotels and restaurants are still way down.

“That’s likely an indicator of people’s willingness to go out, be in contact with other people,” he said. “As the virus spreads, that’s just going to get worse and worse.”

There’s also mounting risk as the pandemic drags on that what were originally temporary job losses will turn permanent. Wendy Edelberg at the Brookings Institution’s Hamilton Project said that’s especially true of service businesses, a lot of which are small.

“Hundreds of thousands of small businesses are failing, at about three times what would be a normal rate,” Edelberg said. “That is no doubt one of the reasons we’re seeing so many people say that their previous jobs are permanently gone.”

Even businesses that are doing OK in the pandemic still face a lot of uncertainty. Robert Frick, corporate economist at Navy Federal Credit Union, said one big question is whether there will be another round of economic stimulus from Congress to boost demand for goods and services.

“From the businesses I talk to, not knowing has an effect on forecasting for the future, on orders, on hiring,” Frick said.

Daniel Zhao at job site Glassdoor said right now hiring is most resilient in warehousing and transportation, construction and manufacturing.

Overall, Glassdoor’s job postings are still down by 10% compared to last year, with hiring weak in education and government as tax revenues have fallen in the pandemic.

And, Zhao said, “holiday hiring is below levels that we’d seen last year. There is still an open question whether the rising COVID-19 cases are going to slow down the recovery further in the winter.”

During the pandemic, when COVID cases are surging, consumer confidence tends to fall.