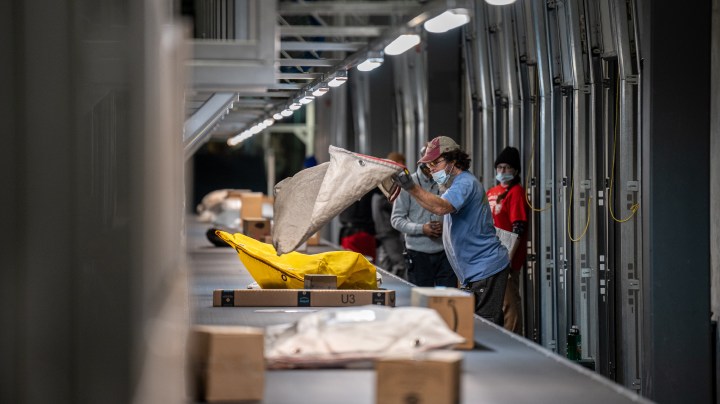 COPY
Wages are up. Inflation is up. And consumer demand? That's up, too. Jon Cherry via Getty Images

Wages are up. Inflation is up. And consumer demand? That's up, too. Jon Cherry via Getty Images
Listen Now

Policymakers will undoubtedly continue refining and telegraphing their plans for tapering asset purchases when the Federal Reserve meets this week. And maybe we’ll get more of a hint of when they may start raising interest rates again.

All this is driven by the decent pace of jobs recovery and wage increases, balanced against the continuing surge in prices — as we saw last week with a jump in consumer prices of nearly 7%, busting records set decades ago.

And driving a lot of the rise in prices is supply chain disruptions, backups and bottlenecks, caused in part by the pandemic itself, with shutdowns and slowdowns at factories and ports across the globe.

But there’s also been a surge in demand from us, American consumers, adding to the stresses on the production and distribution chain.

In just the last year, furniture sales are up 12%, electronics and appliances sales are up 18%, and clothing and accessories saw an uptick of 25%, according to the Commerce Department.

“So the demand for those goods has been very high, and that would put stress on supply chains regardless, and lead to some shortages and higher prices, even if nothing else was going on in the economy,” said Mark Zandi, chief economist at Moody’s Analytics, “and of course, a lot of other things are going on.”

Small businesses operate on tight margins, and they’ve been hit particularly hard by products being backed up or unavailable. But Simon Worsfold at business software provider QuickBooks said the firm’s latest quarterly survey indicates there’s light at the end of the tunnel.

“Roughly two-thirds say that those problems have either been resolved now, or they expect them to be resolved soon,” Worsfold said.

Once the Christmas retail rush has passed, we’ll likely stop hearing so much about shortages and delivery delays, according to Brittain Ladd, a global supply chain strategist. But “the supply chains are going to be under a continuous transformation, really, throughout much of the rest of the 2020s,” Ladd said.

Because, Ladd said, consumers are increasingly coming to expect that the wide range of goods they order online will be delivered not in days, but in hours.