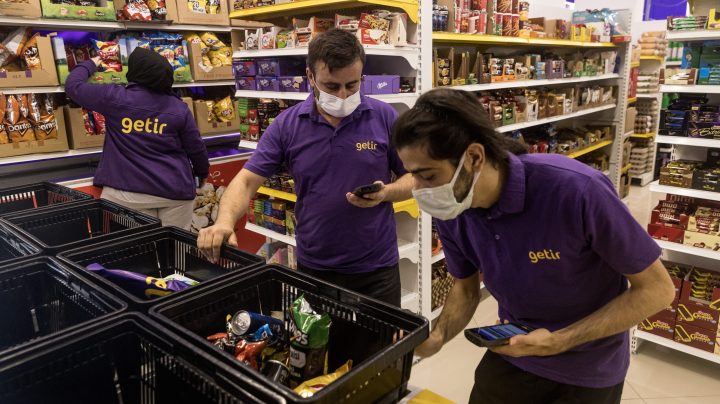 Nearly two years into the COVID-19 pandemic, a new trend has transformed the way a lot of people grocery shop.

In addition to the big weekly errand, a growing slate of companies have carved out a new super-fast delivery segment. It’s often used for last-minute needs or cravings: popcorn to munch on during a movie, a bag of ice for an impromptu cocktail hour, or diapers for when parents run out and the kids are finally down for a nap.

Rather than waiting a day or two for an online order, it can be delivered in as little as 10 minutes. It’s a market that’s booming across the world but particularly in the United Kingdom.

On a recent afternoon, a coffee shop in London was overtaken by Gopuff, an 8-year old company with a firm footing in the U.S. market. As baristas churned out artisan coffees and influencers posed with swag bags, the brand’s co-founder and co-CEO explained why he thinks his brand can succeed in the highly-competitive British market.

“When you look at the [city’s] density, the population, we just think it’s a great place for us to start,” said Yakir Gola. “As we acquired Fancy and Dija, we really like the teams we thought there was great values alignment. But it’s super-early days for the category. The percentage of online sales for convenience and instant needs is super small. So I think the opportunity in Europe is big, the opportunity globally is much bigger. The U.K. is just a start, London is just a start.”

Gola’s company completed its latest funding round in June, giving it a valuation of $15 billion. Backers include giants like Blackstone Horizon, Guggenheim and Softbank’s Vision Fund. It also boasts an 80% market share in the U.S., but competition in the U.K. is fierce. Stand on any street in central London and you can’t miss two or three big red double-decker buses passing, each with a wrap-around ad for a different one of Gopuff’s competitors.

Data from Bain & Company show investors have plowed more than $14 billion into rapid grocery-delivery apps since the start of the pandemic. And during the first three months of 2021, more venture-capital investment went into those services during the whole of 2020.

“We launched our own express delivery platform,” said Elodie Perthuisot., the company’s director of data and e-commerce. “And we partner with Uber, and it’s been probably the fastest-growing service I’ve ever seen in e-commerce.”

The partnership, she said, has raked in more than $113-million in rapid-delivery sales in the last year. She said the fact that customers are sticking with it signals that it’s not just a pandemic-era shopping solution.

“When you’re back to a normal life, you’re also in a hurry, you want to be more efficient. You’re cooking your recipe and you need sugar … you know that you have this solution in super-fast delivery. What we see is this is really only the beginning.”

A win, then, for established players. But Bain’s Ruth Lewis said a number of growing pains lie ahead for the newcomers.

“Right now, the focus of these companies is on attracting new customers to sign up for the service,” she said. “In order to do that, they’re offering big money-off incentives on each order. And this is something they’ll have to move away from in the long run to be profitable.”

She estimates that to break even, these companies will need to complete 1,000 orders each day, costing at least $40 each. That’s far above deliveries for incidentals.

On a visit to one of Gopuff’s London distribution centers, an order for four jumbo bags of chips, four pasta boxes and a package of mini plastic shot glasses totaled about $8. It might not be the average order, but it does beg the question: While consumers might be happy to incorporate another app into their e-commerce repertoire, can players in this red-hot space drive pandemic-induced demand into long-lasting profits?