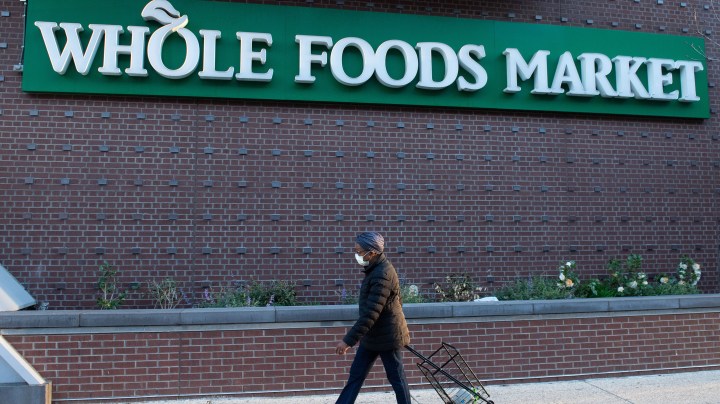 COPY
A Whole Foods Market in Washington, D.C. Whole Foods is one company building a new type of grocery store during the pandemic. Saul Loeb/AFP via Getty Images
COVID-19

A Whole Foods Market in Washington, D.C. Whole Foods is one company building a new type of grocery store during the pandemic. Saul Loeb/AFP via Getty Images
Listen Now

Groceries were already moving online before the pandemic, and now it’s become a major focus in the industry.

Walmart launched its new delivery subscription program Tuesday called Walmart Plus, which includes groceries. More stores have joined Instacart, and other apps like DoorDash have added groceries onto their services.

Now, companies like Whole Foods and Stop & Shop are building a new type of store called a dark store. It looks like a regular grocery store — aisles of produce and pasta, without fancy cheese towers or end-of-aisle displays.

“It doesn’t have to look pretty because consumers are not going to be in the store, right?” said Doug Baker of FMI, a food industry association. Dark stores aren’t open to customers. They’re for fulfilling online orders, which have surged during the pandemic.

And building them like regular markets — not warehouses — means they can be converted into stores if the trend doesn’t hold.

“You can build something for today, but you also need to think about what’s the future,” Baker said.

Part of the reason the future is unclear is not everyone is online ordering experiences have been stellar.

“This integration of the online with the physical carried along with it some very unique problems,” said Terry Esper, professor of marketing and logistics at Ohio State University.

For instance, maybe you order a specific cheese, and you’re sent a substitute that’s $5 more. Or maybe you can’t get a delivery slot.

And for people who live outside a delivery zone, don’t have reliable internet or are receiving federal benefits for food, online grocery shopping may not be an option.

“I think we shouldn’t underestimate the human desire to engage in grocery shopping,” said Hart Posen, a professor at the University of Wisconsin-Madison. He thinks shoppers will eventually settle into a mix of in-store and online, because the online stores don’t let you pick the ripeness of your fruit. And they definitely lack free samples.