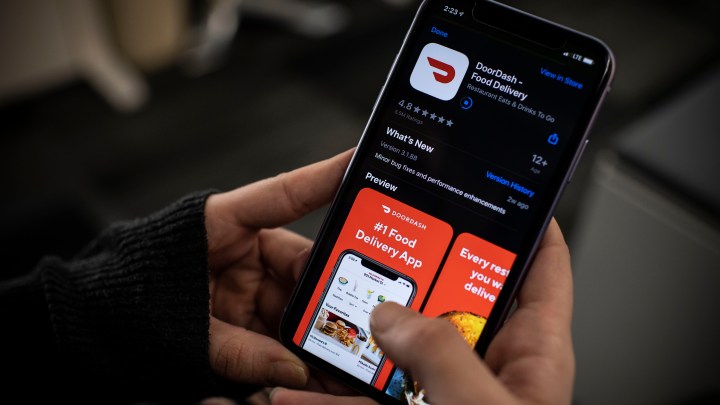 COPY
DoorDash will be partnering with Albertsons to expand its grocery delivery sources. Eric Baradat/AFP via Getty Images

DoorDash will be partnering with Albertsons to expand its grocery delivery sources. Eric Baradat/AFP via Getty Images
Listen Now

DoorDash, one of the leading food delivery apps, announced this week it’s expanding its grocery delivery service by partnering with Albertsons. It’ll offer on-demand groceries from nearly 2,000 stores — like Safeway, Vons and Jewel-Osco.

DoorDash’s business has ballooned during the pandemic when grocery delivery became an overnight necessity for many households.

This partnership is betting that this shift to online food shopping — and online everything shopping — is here to stay, even as the economy opens back up.

DoorDash said this program was in the works before COVID-19 lockdowns, but they did speed things along. “Obviously the pandemic has pulled forward some of the demand we thought was going to happen in the outer years,” said Fuad Hannon, who leads new verticals at DoorDash.

Hannon said this grocery program was a natural extension of the company’s restaurant meal delivery, and something DoorDash wants to invest more in: “How do we help businesses make this shift to a digital-convenience-first economy?”

For grocery stores, though, with already razor-thin margins, there’s a little more risk involved with delivery, according to Forrester analyst Brendan Witcher.

“You would never want to do this on your own as a company first. It would just be way too out of scope for you, as far as cost goes,” he said.

Witcher said stores will likely see the pandemic boost in online sales dip in the coming months, so it’s a critical time to have delivery clearly advertised.

Companies aren’t trying to replace brick-and-mortar stores either, Witcher said. But brands do have incentives to keep investing in this technology.

For one thing, mobile orders mean consumer data, said Doug Baker with the Food Industry Association. “So, if you’re online and you’re searching for products, you’re leaving a trail.”

Stores already tailor inventory and can start pre-filing customers’ carts, and they are racing to secure the customers who tried online grocery shopping for the first time last year. Baker said it’s the kind of consumer habit that sticks.

“When a consumer is given something by an industry to create a convenience, the customer doesn’t say, ‘Well, thank you. I’m done with it now, take it back,'” he said.

Even if this convenience sticks around, Baker said it may not be immediately profitable. It could take a while to iron out kinks that discourage customers, like asking for three potatoes and getting 3 pounds delivered.

A previous version of this story misspelled Fuad Hannon’s name. The text has been corrected.