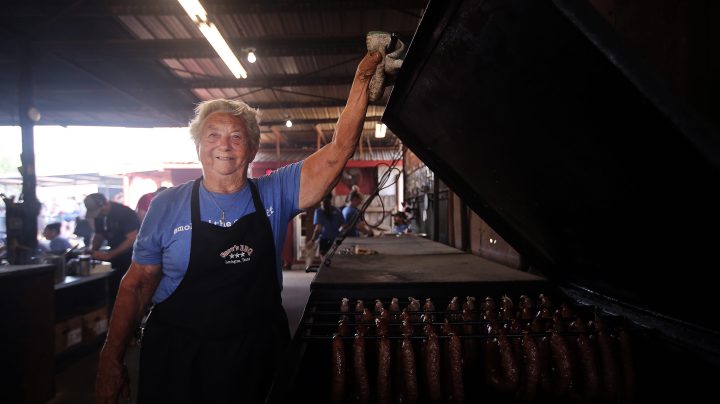 COPY
Tootsie Tomanetz, the 86-year-old pitmaster at Snow's BBQ, tends to sausages on a Saturday morning in Lexington, Texas. Tomanetz has been cooking barbecue since 1966 and says she never could have imagined the popularity she's witnessing today. Filipa Rodrigues for Marketplace

Tootsie Tomanetz, the 86-year-old pitmaster at Snow's BBQ, tends to sausages on a Saturday morning in Lexington, Texas. Tomanetz has been cooking barbecue since 1966 and says she never could have imagined the popularity she's witnessing today. Filipa Rodrigues for Marketplace
Listen Now

A little after 3 a.m. on a Saturday in Lexington, Texas, a town of fewer than 1,500 people about 50 miles northeast of Austin, street lamps furnished the only light at 516 Main St. Cattle are mooing in a barn at the end of the block.

There are already 25 people in camping chairs lined up outside of a place called Snow’s, listening to music on Bluetooth speakers and chatting about just how crazy this looks.

It’s not Black Friday; nobody’s going home with a cheap big-screen TV. These folks are here for lunch.

“We just, we love BBQ, man,” said a guy who just gave his name as Milton. He and about six buddies drove down from Dallas just to get a taste. They arrived at midnight.

“We wanted to make sure we were first in line, so we left last night,” he said. “We didn’t want to leave anything up to chance.”

When the barbecue runs out here, that’s it for the day. And Snow’s is only open on Saturdays.

By the time Snow’s started serving at 8 a.m. this morning, more than 200 people were waiting in line.

Milton said his party tried all the proteins on the menu: brisket, pork ribs, sausage, turkey, chicken. It lived up to expectations, but it wasn’t cheap. “Today, I spent $93 on my plate,” he said. “And that’s for me and my wife, and we’ve got some stuff to take home with us.”

For most of its history, barbecue was food for poor people — predominantly Black poor people. It was cheap and delicious; the pitmasters who made it and the folks who ate it were members of the same community.

That’s not really the case anymore. Barbecue is everywhere. Some pitmasters are charging top dollar for their cuisine, becoming social media and reality TV stars and even winning James Beard Awards.

Snow’s 86-year-old pitmaster, Tootsie Tomanetz, said back when she started in 1966, barbecue was a way to get rid of the meat she and her husband couldn’t sell at their butcher shop.

“It was your leftover steaks,” she said. “You may have a string of T-bones you did not move, T-bones that week. Or ribeyes. You’ve got a couple of sections in there hanging in the cooler, and you can’t keep them forever. So what do you do with them? Saturday barbecue.”

Tomanetz learned the practice from a pitmaster named Orange Holloway. He was a hunting buddy of her husband’s who cooked barbecue at City Meat Market in Giddings for decades. Like the vast majority of pitmasters at the time, he was Black.

“Yeah, it was African Americans who, or African Texans in particular in our part of the world, who were considered the masters of barbecue,” said Robb Walsh, a Texan who’s been writing about barbecue for about 30 years.

But Walsh said these days, Black pitmasters aren’t the ones getting most of the attention.

“The media wants to write about white, hipster barbecue guys who are serving extremely expensive and absolutely delicious barbecue, but these guys only make up, you know, what? A couple — 2%, 3%, 5% of the whole barbecue market in Texas?”

Google “famous BBQ pitmasters,” and most of the faces you see are white. Austin pitmaster Aaron Franklin is one of them. He’s widely considered a master of the craft; he’s even got a James Beard Award.

People at Snow’s lined up to get selfies with Tootsie Tomanetz, who appeared in a recent Netflix documentary and is also white. But the increased visibility and higher price points associated with barbecue are certainly not solely the purview of white pitmasters.

Damien Brockway runs a barbecue trailer in Austin called Distant Relatives. He took a DNA test that traced his roots back to Nigeria, Mali and Cameroon, and he’s incorporated their traditions into his cooking.

At first, he opened his trailer in Austin’s historically Black east side.

“Most of our client base were laborers that worked around there,” he said in between slicing pork ribs for customers in line. “We were attached to a tire shop. We used to feed the tire shop on a semi — not a semi — on a daily basis,”

But a few months ago, he moved the trailer to a new spot outside a local brewery. Now, he’s got parking, more room and a different clientele. His prices are on par with what you’ll see in other fancy barbecue joints.

“Any cheaper, and then it’s like it becomes hard to turn the lights on,” he said. “I mean, we’re not, we’re not slaying it and dropping all this money to the bottom line because a lot of it’s eaten up by cost and it is labor-intensive.”

The cost of beef is up more than 12% from last year. And historically, labor has been underrepresented in the cost of barbecue, according to Daniel Vaughn, barbecue editor at Texas Monthly magazine.

“The amount of labor that goes into making barbecue hasn’t really ever been rewarded much,” Vaughn said. “Because, from an outsider, that labor is seen as something for the business to absorb.”

What some people have called the “gentrification of barbecue” is often on the mind of Brian Mays, the Black pitmaster and owner of Sam’s BBQ on Austin’s east side. Sure, it’s more popular and expensive, now.

In the 46 years his family’s been smoking meat at this place his grandfather started, the neighborhood and community have changed. He used to sell almost exclusively to his Black neighbors.

As the area gentrified, though, he adjusted.

“You cannot be in business staying at $2 from 30 years ago for a sandwich,” he said. “You cannot do that, boss. As time changes, you change.”

Mays has been offered lots of money for the ground that Sam’s BBQ sits on, but he’s not interested.

He said he’s making plenty of money selling barbecue, and he wants to cook for at least another four years so that the tenure at Sam’s is half a century.

Correction (Oct. 14, 2021): In an earlier version of this story, the wrong caption appeared under the main photo. It has been corrected. 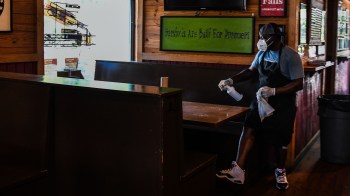