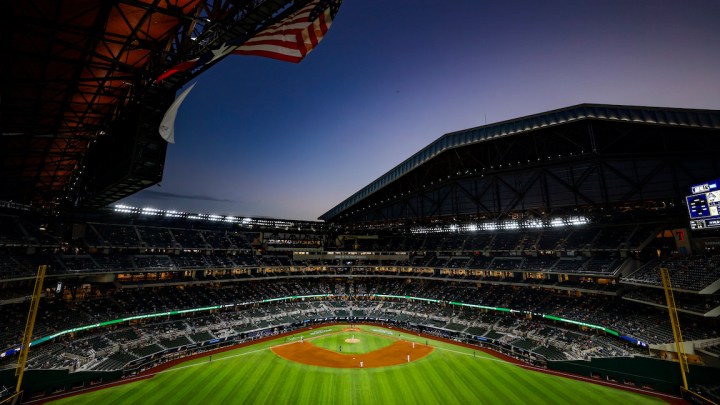 Thursday was opening day in Major League Baseball, and even though a game between the Washington Nationals and the New York Mets had to be postponed because of COVID, the other games were happening with fans present in some capacity.

In Arlington, Texas, home of the Rangers, Globe Life Field is getting ready to host games at full capacity. That means more than 40,000 people in the seats. Masks required.

From Austin, we caught up with fans and local businesses to talk about what that many folks in the stands means for the area’s economy and if it’s stirring concerns.

Dallas resident David Choate is ready for Monday. That’s when the Texas Rangers play at home for the first time this season, against the Toronto Blue Jays. He’s taking his two sons and a friend of theirs. But he admitted he’s doing it with mixed emotions.

Choate said he’s happy that the Rangers are allowing everyone in because of what it means for the local economy. “The people who work around the stadium, the people who work in the restaurant business, the people who, shoot, are going to park cars, I’m glad to see them able to feed their families and make some money.”

One restaurant about half a mile from the stadium is Bodacious BBQ. Michelle Ruegsegger, a manager there, said, “We’ve been here 30 years. So we’ve always had people stop in and get some food and be able to take it into the stadium. So hopefully we’ll get some of that business.”

Major League Baseball is hoping for more business too. Last year, when stadiums were empty, the league lost billions.

Maury Brown, who runs the sports analytics company Bizball, said most other ballparks will be operating at about 25%. But any fans are a welcome sight.

“Yes, you’re going to get some revenues in it, certainly not to the level that the league would like to see. But it’s better than nothing, which is what we saw last year,” Brown said.

Rangers fan Choate said he understands some fans’ reluctance to get out there with tens of thousands of people. “I’m not stupid. It’s a real dangerous virus, but that’s a personal decision.”

Rangers games aren’t the only events operating at full capacity in Texas. Gov. Greg Abbott declared the state 100% open in early March. He also got rid of an executive order mandating that people wear masks in public.