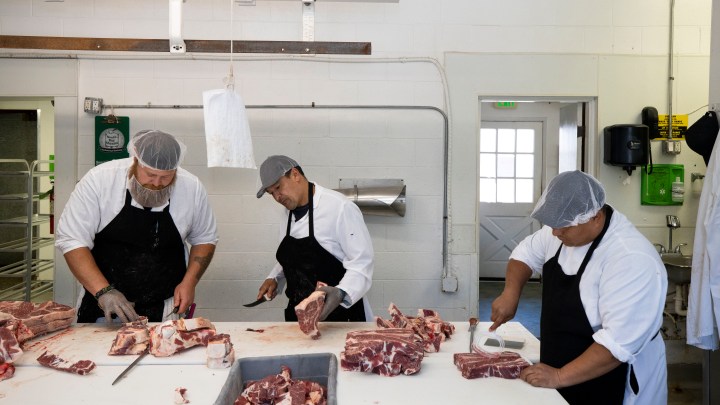 COPY
Though the aid is meant to help smaller meatpackers expand their processing capacity, the industry is hampered by a shortage of workers. Brent Stirton via Getty Images

Though the aid is meant to help smaller meatpackers expand their processing capacity, the industry is hampered by a shortage of workers. Brent Stirton via Getty Images
Listen Now

The White House announced this week that it’s giving $1 billion in aid to small meat-processing companies, including grants to help build new plants and easier financing for processors that need to borrow.

The idea is to give the smaller processors a leg up against the four big companies that handle the lion’s share of meat production.

Over the past year, the cost of beef has gone up almost 20%. But the income of the people who actually raise the animals? Not so much.

“The small farmer and rancher today is just getting weeded out,” said Kerry Bexley, who owns Snow’s BBQ in Lexington, Texas, and runs a small cattle ranch.

The price Bexley gets per head has not kept up with the prices he’s paying for brisket.

“I mean, I’m paying probably, might near double of what I was paying a year and a half ago,” he said. “And I’m not getting double on the hoof when I sell them at the market.”

Part of the issue is that ranchers don’t have a lot of meatpackers they can sell to. That’s been true for decades, according to Dan Sumner, an agriculture economist at the University of California, Davis.

“Concentration has been around in the meatpacking industry for a very long time, at least a generation or two. And it really hasn’t changed very much,” he said.

Demand for beef has gone up during the pandemic — and so has revenue at some of the big meat processors. Sumner said it’s worth keeping in mind that these companies operate at a large scale.

The Joe Biden administration said the aid package is meant to increase competition by expanding processing capacity. Even with the additional aid, it’ll be a challenge for smaller producers to compete in the long term, per Glynn Tonsor, who teaches agricultural economics at Kansas State University.

“And one needs to think not in days or weeks, and frankly even individual years, but decades. Because these are very expensive facilities that have multiple decades of life to them when they’re built,” he said.

And Tonsor said the meatpacking industry is continuing to deal with a shortage of workers that’ll make it harder to operate any new facilities when they’re built.