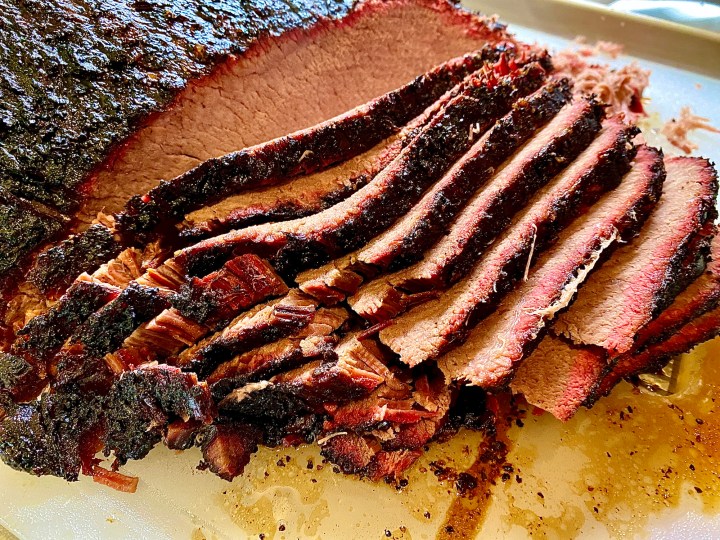 COPY
Brisket wasn't always the most popular choice, but it sells high these days.

Brisket wasn't always the most popular choice, but it sells high these days.
Listen Now

Back when 86-year old pitmaster Tootsie Tomanetz started making barbecue in the 1960s, nobody even talked about brisket.

“It was the toughest damn piece you can get a hold of. It went into hamburger or … mostly hamburger,” she said, taking a break from her job at Snow’s BBQ in Lexington, Texas.

Something changed in the early 1970s, she said. That’s when big meat packers made it easier to buy individual cuts of beef, boxed, instead of a whole carcass.

“Once that happened, you could just order the cuts you wanted,” said Robb Walsh, who has been writing about barbecue for about 30 years. “And Walter Jetton, who was LBJ’s barbecue man, when people wrote to him and said, ‘I want to barbecue a whole steer or half a steer or whatever, how do I do it?’ He said forget it. Just get a box of briskets because the brisket has a big fat cap on it. He called it the self basting cut.”

But it still wasn’t all that popular of a cut.

Daniel Vaughn, Texas Monthly Magazine’s BBQ editor (yes, it has a BBQ editor) said that started to change about 12 years ago, when Aaron Franklin started selling brisket in Austin.

“I think because of the popularity of Franklin Barbecue, and how popular sexy photos of moist brisket have become since then, it’s pretty desirable to go get that perfect slice of brisket,” Vaughn said.

These days, Franklin charges $34 per pound for the brisket that helped him win a James Beard Award. He said he’d have to get out a calculator and crunch the numbers, but he’s still probably not charging what he should.

“If we did normal margins, normal food cost for brisket, we would probably have to charge you know, probably somewhere in the range of like 80 bucks a pound,” Franklin said.

Franklin said that would drive even his loyal customers away. But that $34 per pound would certainly drive away the customers of Hecho en Texas in Cameron.

“They would laugh at me,” said Hecho’s pitmaster Jamie Galvan. He doesn’t have much name recognition and he’s not parked near a tourist destination.

“I’m kind of out in the middle, I guess you could say, nowhere,” he said. “So, my clientele is strictly local people.”

The median household income in Cameron is a little more than $38,000. Galvan charges what he can.

“I started out selling at $16 per pound and people would walk up to the window and they would ask how much the brisket was and they would leave,” Galvan said. “They wouldn’t even buy it.”

Pitmasters are feeling pinched by rising beef prices, some paying two or three times what they were just a few years ago.

Meanwhile, ranchers say the price they’re getting for a head of cattle hasn’t changed much at all.

Both sides say it’s meat processors that are reaping the profits.

Correction (Oct. 20, 2021): A previous version of this story misspelled Tootsie Tomanetz’s name. The text has been corrected.