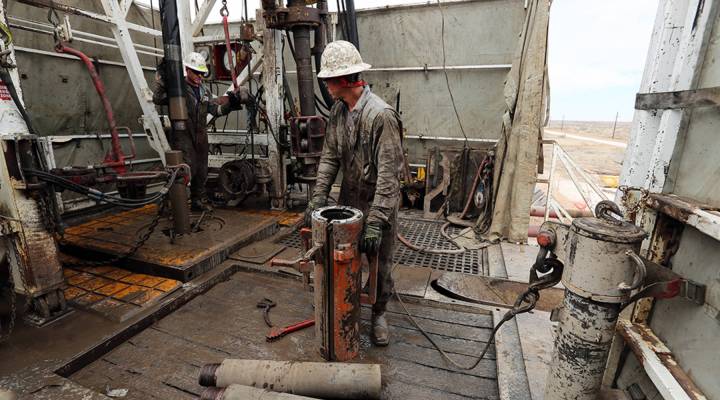 COPY
Workers on an oil rig in Midland, Texas, part of the Permian Basin, where output has tripled in the past three years. Filipa Rodrigues/Marketplace

Workers on an oil rig in Midland, Texas, part of the Permian Basin, where output has tripled in the past three years. Filipa Rodrigues/Marketplace
Listen Now

A hundred-foot oil rig pushes up amid acres of irrigated cotton fields and long dirt roads on this oil patch between Midland and Odessa, the two main towns in the Permian Basin in West Texas. Both have about 150,000 people. Tommy Taylor, director of oil and gas development at Fasken Oil and Ranch, seems to know most of them.

Taylor has worked at Fasken for 33 years. He jokes that the oil business isn’t just on his resume, it’s in his blood.

Oil prices are hovering close to a three-year high, above $68 a barrel. Much of that oil comes from the United States, which will overtake Russia as the world’s top oil producer by year’s end, according to the International Energy Agency.

That trend is thanks, in large part, to production in the Permian Basin, where output has tripled in the past three years. The basin towns of Midland and Odessa depend heavily on the oil and gas industry. For families here, the price of oil makes the difference between hard times and high times.

About six months ago, oil started creeping above $50 a barrel. Eighteen months earlier, it had been about half that.

Taylor said Fasken went down to operating just one rig and stopped hiring. The drillers and roughnecks drifted away and found jobs elsewhere.

But when oil prices fall, there are repercussions for those outside the oil industry, too. As they say in these parts, “even if you’re not in oil and gas, you’re in oil and gas.”

When oil prices dropped, KD’s BBQ in Midland felt it. Salesmen stopped coming in for food to take out to the fracking crews, general manager Dustin Freeman says.

Dustin Freeman, general manager of KD’s BBQ in Midland, said even without checking prices, he could feel when oil was in the doldrums.

“We felt it when companies started taking away their salesmen’s cars and what they could spend,” he recalled, seated at a picnic table in the restaurant’s main dining room. “A lot of our business is these salesmen coming in, grabbing stuff and taking it out to rigs, taking it out to frack crews, and those almost ceased, completely.”

Freeman had to cut costs so his restaurant could survive, but that wasn’t easy when he had to buy another commodity with a rapidly fluctuating price: beef. After all, farmers don’t drop their prices just because oil prices are low. Freeman said now that oil prices have picked up again, everyone’s happier.

Right now, thankfully, traffic is awful, as 18-wheelers ferry gear to and from the oil patch, stuck between workers’ pickup trucks and moms taking their kids to school.

The state wants to boost investment in what it calls “public infrastructure and workforce development.” Diana Hinton, a professor of history at the University of Texas, Permian Basin, said that’s easier said than done. She should know. Aside from her academic credentials, she’s also lived in the area since 1973.

“We live in a town that’s squarely tied to a very volatile industry,” Hinton explained, seated in her recliner in the living room of her ranch-style home in central Midland. “But most of us, we’re pretty sore about the condition of the roads and the level of traffic, and, well, that’s part of the picture.”

“We live in a town that’s squarely tied to a very volatile industry,” says Diana Hinton, a history professor at the University of Texas, Permian Basin.

Last year, oil taxes brought the state more than $2 billion in revenue. But, unfortunately for residents, none of that is specifically allocated to fixing roads in the areas where there’s production. Instead, the money is divided among several state funds. Hinton said the infrastructure problems go beyond potholes in roads, but she acknowledges that local government faces some tough choices.

“Because you can’t predict when the next boom is going to happen, you can’t have built the school already, you can’t have constructed the water mains and sewers already, because if you’re wrong, you just spent one heck of a lot of money, and the classrooms are empty and nobody’s using the sewer lines,” she said.

Midland County Judge Mike Bradford has a big say in what gets built. He complained that too much of the money generated here goes to the state capital and isn’t used to help the locals. The Midland/Odessa metro area is consistently among the highest median-household-income areas in the United States, yet the public schools here are consistently among the poorest-performing in the state.

“The school district has the hardest task,” Bradford explained. “The state of Texas has continually cut school funding. They can’t build schools tomorrow for the population they got now, and when the market changes, hear yourself walk down that hall. They’ve got a lot more at stake.”

The residents of Midland and Odessa have a lot at stake, too. When oil prices and production rise, local realtors, bar owners and apartment complexes know it, and they hike their prices.

If you live in the Permian Basin and you aren’t getting the kind of wage bump that oil workers are currently enjoying, you could be out of luck.