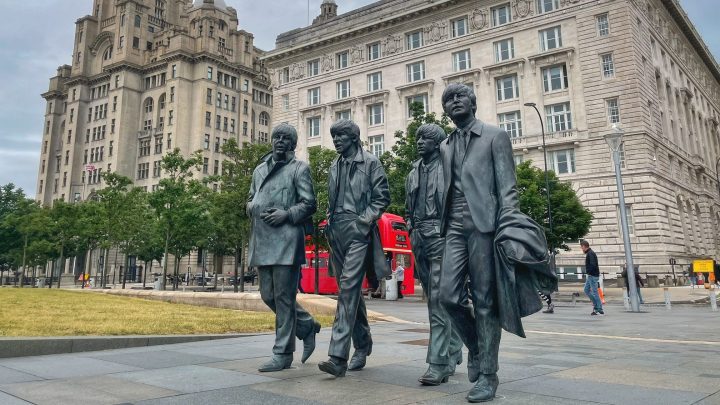 COPY
UNESCO revoked its World Heritage designation for six sites on Liverpool's waterfront. Now, city officials look to the future as they try to balance protecting the past with fostering economic prosperity. Victoria Craig

UNESCO revoked its World Heritage designation for six sites on Liverpool's waterfront. Now, city officials look to the future as they try to balance protecting the past with fostering economic prosperity. Victoria Craig
Listen Now

Where the River Mersey laps England’s northeastern coast, an economic evolution has taken place over centuries.

In the 1700s, Liverpool was a pioneer in dock technology and construction, helping the Royal Albert Dock rise to prominence for its role in transatlantic sea trade. It wasn’t just goods including sugar, cotton, coffee and tobacco that crossed the ocean; it’s estimated about 5,000 voyages were made carrying 1.5 million African slaves to the Caribbean and North America. It’s a dark history the city now acknowledges and uses to educate visitors to its International Slavery Museum, located on the dock where those ships first set sail.

By the 1800s, nearly half of global trade passed through Liverpool. But the city’s economic fortunes had faded by the latter part of the 20th century.

“In the ‘70s when international trade changed, technology changed, the port, in effect, collapsed — and with that, a big chunk of the city’s economy. [Liverpool] collapsed economically, socially, politically, physically,” explained Michael Parkinson, a public policy professor who serves on the city’s World Heritage Taskforce and has authored several books on the rise and fall of Liverpool’s economy.

He said that in the 35 years since the economic decline began, the city has enjoyed a sort of renaissance, investing more than a billion dollars into regeneration efforts. In 2004, UNESCO awarded Liverpool a World Heritage designation to six sites covering 300 acres of piers, docklands, warehouses, produce exchanges and civic buildings.

But recent plans to rejuvenate the northern part of the docklands drew scrutiny from UNESCO, and in late July it revoked the coveted World Heritage status. Réka Virágos — a specialist at the World Heritage Center who helped prepare information used to make the final decision about Liverpool’s status — said the decision was one made over years, not days.

Years of consultations with government officials took place. But plans for the nearly $7 billion project — which includes new offices, hotels, cruise-liner and ferry terminals — have gone ahead. UNESCO’s biggest point of contention was a nearly $700 million proposal to build a new soccer stadium for Everton Football Club at Bramley Moore Dock.

“This is a large-scale project that is not tailored to the characteristics of the values on the site: Their proportion, their quantity, their height of the planned and constructed buildings are not aligned with the protection and management measures that were advised and that was promised by the state party when they proposed the site for inscription to the list,” Virágos said.

She considers the de-listing of the site a loss for the international community. Liverpool’s mayor, Joanne Anderson, agrees but said the city could not exist in a time warp and that economic development was badly needed in the northern docklands area.

“We have an area that is one of the poorest areas in the country. The football stadium is a massive investment that we can’t afford to lose to tackle poverty in the area. We need to still value our heritage and protect our value as a city and make sure we grow economically, as well,” Anderson said.

The development at Bramley Moore Dock, including the stadium, is expected to bring a more than $1 billion boost to the local economy. For the people running the city, the decision whether to move ahead with this development or keep the World Heritage designation came down to how Liverpool should value the economic well-being of its residents.

“The city never really got any added economic value of having a status,” Parkinson said. “It didn’t get more investment, it didn’t get more tourists. North Liverpool, which was the start of the city, hasn’t had its fair share. And that’s what this row with UNESCO is really all about. It’s: What’s the economic future of this city, and who decides it for whom?”

UNESCO said the city can re-nominate a part of the former World Heritage site for recognition if it believes the area still has outstanding universal value. For now, though, the mayor and many in the community have decided to “let it be” as they focus on building an economically vibrant city that remains true to its historic past.

For Anderson, the mayor, that means considering all options when it comes to future cooperation with UNESCO.

“The plan going forward is to make the stadium, but in terms of protecting our heritage, it’ll be a massive part of that. Absolutely we’ll work with UNESCO. We’re not bitter, we’ll do everything we can to work with them in the future,” she said.

Until then, Anderson said, she’s setting up a working party to identify future ways to continue investing in the city’s historical sites, urban planning and regeneration ideas.