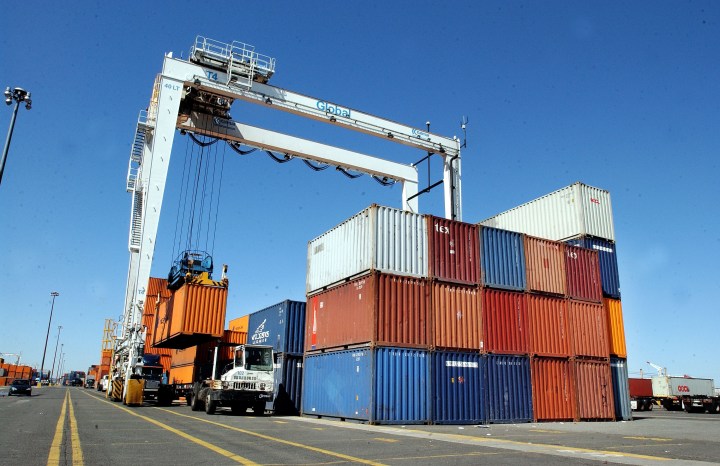 COPY
The shipping container was invented in 1956, and ended up changing the landscape of the industry. Stephen Chernin/Getty Images

The shipping container was invented in 1956, and ended up changing the landscape of the industry. Stephen Chernin/Getty Images
Listen Now

West Coast ports, including the country’s busiest at Los Angeles and Long Beach, are in the middle of renegotiating labor contracts with the union that represents dock workers. It’s a critical time for the supply chain and contracts expire July 1. A major sticking point is automation: shipping companies say ports need to modernize to improve efficiency.

But dock workers have been wary of tech that could cost them their jobs – part of a long history of managing technological changes to their workplace.

Last century, another new innovation revolutionized the shipping industry: steel containers, invented in 1956. They meant instead of loading and unloading box by box, dock workers could use cranes to lift containers off a ship, and plop them right onto the bed of a train or truck.

“It would be a safer workplace,” said Peter Cole, a history professor at Western Illinois University. “It also resulted in less brute manual labor and longer careers on the waterfront.”

But, he said, it meant far fewer workers would be needed. So in 1960 the International Longshore and Warehouse Union, the same group that’s negotiating port contracts today, agreed to allow containers, with some conditions.

“The union got an iron-clad promise that not a single worker would be fired,” said Cole.

Shipping companies set set up a multi-million dollar fund to generously buy out redundant workers. It’s a model the ILWU has closely followed since, said John Ahlquist, a policy professor at University of California, San Diego.

“They want to make sure the existing workers share in the benefits of new technology,” he said. “They also are very cognizant of the fact that new technology creates new jobs.”

In their 2008 contract, for instance, dock workers secured a promise that their members would be first in line for new jobs maintaining and repairing machinery in automated terminals.

But many workers in other industries facing job cuts from automation don’t have that power, said Harry Holzer, the John LaFarge, Jr. S.J. professor of public policy at Georgetown University.

“If the workers are not unionized, and if you’re not in a tight labor market environment, employers have a pretty free hand,” Holzer said.

As automation and artificial intelligence continue to reshape jobs across the economy, he said questions about how to help displaced workers and who should be responsible for helping them will only become more important.