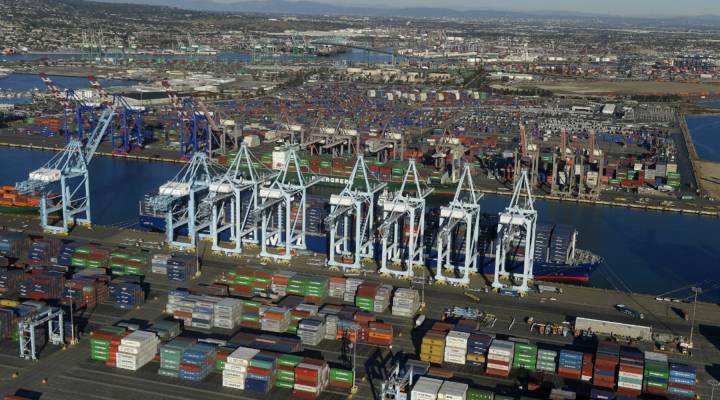 COPY
The CMA CGM Benjamin Franklin, the largest container ship to ever call at a North America port, is docked at the Port of Los Angeles in San Pedro, California. SCOTT VARLEY/AFP/Getty Images
Last Ditch Effort: The Panama Canal and Peak Trade

The CMA CGM Benjamin Franklin, the largest container ship to ever call at a North America port, is docked at the Port of Los Angeles in San Pedro, California. SCOTT VARLEY/AFP/Getty Images
Listen Now

New York just passed the halfway mark on its $1.3 billion project to raise the Bayonne Bridge, set to open in 2017. The aim is to attract mega ships, the ones now able to move through the expanded Panama Canal. But making room for these vessels with taller bridges and deeper harbors is just the beginning. The challenges start all over again when these giant ships actually dock.

“They’re taller than the Empire State Building, loaded with 13,000 trucks, essentially, and they’re massive,” said Peter Califano, a crane operator at the ports of Los Angeles and Long Beach. West Coast ports have been receiving mega ships for years now, and may provide a model to New York, Charleston and other East Coast ports for how to handle them.

“It’s the peaking of the volume,” said Tim Power, a shipping consultant at Drewry. “They are effectively asking the ports to be twice as productive to get ships out on time.”

Once docked, containers move through an elaborate circuit from ship, to storage yard, to truck or rail. As stacks of containers are moved out, other stacks are moved onto ships. With bigger ships, even small disruptions in the flow create big consequences.

“The yards get clogged up easier,” Califano said. “You have to be able to move the cans off the dock quickly.”

Planning is key and it is further complicated by shipping alliances. Several shipping companies must team up to fill a single vessel, meaning the containers, or cans, arrive all mixed up.

“It’s like going through a Caesar salad and separating croutons and salad and chicken,” said Bobby Olvera, president of the International Longshore and Warehouse Union’s Local 13 in Los Angeles.

To make that separating easier, Olvera said shipping companies, retailers and ports across the world need to share data from the start. Last year when the Benjamin Franklin, the largest-ever container ship to dock at a U.S. port, called on the Port of LA, they did exactly that.

The CMA CGM Benjamin Franklin at the Port of Los Angeles.

“We learned the information of this ship’s vessel stowage some two weeks ahead of time,” said Gene Seroka, executive director at the Port of LA. “We also had influence of the loading scheme of this vessel in China and South Korea.”

Seroka said they are just scratching the surface when it comes to sharing this kind of information. The ship was turned around faster than expected — a proof of concept for this type of planning. A well-packed ship from Asia won’t run up extra time and money when it is unloaded in the U.S. Additional unloading costs can erode the 25 percent savings companies get by using these big ships in the first place.

The Port of LA and its neighbor in Long Beach are also starting to let machines do more of the unloading.

“It’s simply, an automated crane can work all the time in a systematic way, constantly,” said Jean-Paul Rodrigue, a professor of global studies at Hofstra University.

While automation could increase efficiency long term, the investment can run hundreds of millions of dollars, and according to Rodrigue’s research, “automation does not appear to be attracting that much more traffic.”

That’s not likely change with growth in global shipping slowing down.

ILWU’s Olvera said the cost of automating isn’t the only issue: “Robots don’t shop at stores, they don’t pay taxes.” He wants to know who will buy the goods to fill these ships or pay the taxes to fund port upgrades if jobs are displaced. That’s a balance each port will have to learn for itself.