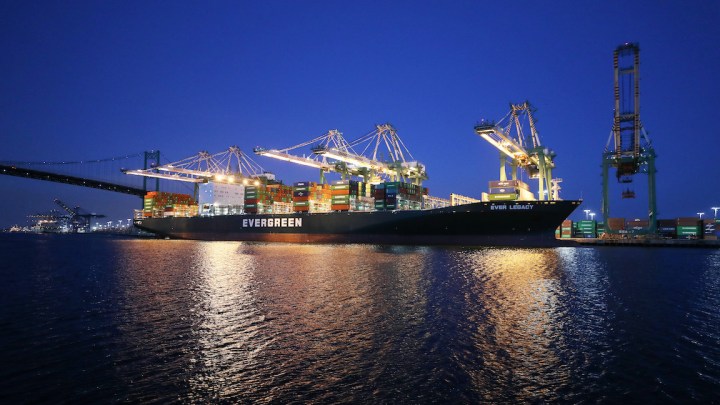 COPY
Bottlenecks at American ports could last through the summer, according to a manufacturing expert. Above, a ship is unloaded at the Port of Los Angeles. Mario Tama/Getty Images

Bottlenecks at American ports could last through the summer, according to a manufacturing expert. Above, a ship is unloaded at the Port of Los Angeles. Mario Tama/Getty Images
Listen Now

If you’re tapping your feet waiting for that Amazon order to come, you might want to pay attention to port backups in Southern California.

As of yesterday, a record 38 container ships were waiting to offload at the ports of Long Beach and Los Angeles.

It turns out a whole lot of Americans who can’t spend their disposable income on vacations or concerts are clicking and buying instead. And the system can’t keep up.

Typically in Southern California, when you hear about the traffic, it’s the roads. Now, it’s the ports, too.

“I live on the beach. I get up every morning, I have my cup of coffee, and it’s ships as far as the eye can see,” said Weston LaBar, CEO of the Harbor Trucking Association in Long Beach.

The port there has been jammed since last fall, as American consumers went into overdrive ordering goods from Asia. On top of that, hundreds of truckers and port workers moving the stuff have contracted COVID-19. And their colleagues are nervous.

“Many of these folks are 50-plus years old,” LaBar said, “and so when you’re talking about seeing people get sick, in some cases they don’t feel comfortable going to work.”

He’s pushing to move the workers up the vaccine priority list.

Normally, when importers are facing delays, they can move emergency items by air instead of ship. Not so much these days.

“There’s much less air cargo capacity available on the transpacific because you don’t have the passenger planes with the large bellies to carry freight flying back and forth,” said Paul Bingham, transportation analyst at IHS Markit.

Bingham said the shop-from-home explosion is causing shipping delays at East Coast and European ports, too.

So, where’s the good news?

American factories are humming and ordering lots of raw materials. Unfortunately, those are stuck on the ships coming from Asia, too.

“New-order levels have been strong, production has been strong,” said Timothy Fiore, head of the manufacturing business survey for the Institute for Supply Management. “We’re definitely in a manufacturing expansion cycle.”

Fiore said the bottlenecks at American ports could last through the summer.