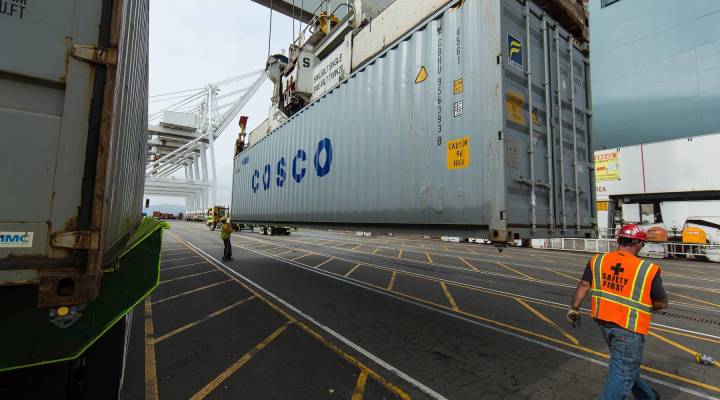 There are 22 massive docks at the Port of Long Beach where ships pull up to load and unload cargo. At all but one of those docks, most of the work is still done by people. The Long Beach Container Terminal, which opened in April 2016, is an exception. Here, self-driving vehicles and automated cranes do most of the work. It requires two-thirds fewer workers than traditional terminals. And that frightens the International Longshore and Warehouse Union, which controls all the jobs at the docks.

But viewed from another perspective, automation is part of the solution to one of Southern California’s most vexing environmental problems: some of the worst air pollution in the country. The ships, trains, trucks and heavy cargo-moving equipment add up to make the Ports of LA and Long Beach the largest single source of smog-forming air pollution in Southern California.

It raises the question: what happens when a new technology that can fight climate change and clean up the air also eliminates jobs? And not just any jobs, but some of the last truly well-paying blue-collar jobs in Southern California?

ILWU members receive an average salary of $155,000 a year, pay almost nothing for their health insurance, and get up to six weeks of paid vacation. But the union estimates that at the Long Beach Container Terminal, two-thirds of those jobs are gone due to automation.

“It makes me sick to my stomach,” said Gary Herrera, the vice president of ILWU Local 13. “I look at this place, and I do not like what it stands for. These machines get rid of men.”

He stops in front of LBCT’s 48 automated stacking cranes. They load containers onto semi-trucks that haul them out of the port to distribution warehouses. In a traditional terminal, workers operate them from booths on top, but in the LBCT, four people can control all 48 cranes at once.

“The same guy who used to drive the crane out in the yard eight hours a day is now doing it from a remote console, sipping coffee and listening to light music in air conditioning,” Anthony Otto, the LBCT’s president, said in a YouTube video touting the benefits of automation. He and other LBCT staff declined to talk on the record for this story.

But they said, in a tour, that automation creates opportunities for new kinds of jobs, like mechanics to maintain the self-driving vehicles. And, they said, their robots are cleaner than the diesel fueled, human-controlled machines they’re replacing.

Those kinds of reductions gave Adrian Martinez, an environmental lawyer with Earthjustice, a very different take on the automated equipment at LBCT than guys like Gary Herrera. He argued these reductions are a big deal because residents in the port area have a disproportionately high cancer risk from breathing polluted air, according to local air regulators.

“It’s exciting to see zero emissions equipment actually on the terminal,” Martinez said. “Because from a basic level, we’re not going to solve the air pollution crisis in the Los Angeles area until we eliminate port and freight pollution.”

In November 2017, the Port of Long Beach and the neighboring Port of Los Angeles pledged to dramatically slash their emissions by phasing out internal combustion engines. Their goal is to replace all diesel trucks and cargo-handling equipment with zero-emissions equivalents by 2035. Usually that means electric vehicles.

The big question is whether the ports’ new mandate will lead to more automation.

Currently, electric cargo-handling equipment is more than twice as expensive as its diesel equivalent. That could lead terminal operators to choose to automate to save on labor costs, said Thomas Jelenić, who represents terminal operators as the vice president of the Pacific Merchant Shipping Association.

“People generally won’t seek out automation in and of itself unless they can justify it in some way,” he said. “But if they’re forced to electrify, the costs of electrification then dictate the need to automate.”

But according to Mark Sisson, a port planner with the consulting firm AECOM, concerns about price are overblown. He believes the price of electric cargo-handling equipment will drop now that there’s a mandate for the largest ports in the Western Hemisphere to buy it. And right now, at least three other marine terminals are testing human-controlled electric cargo equipment.

Back in the terminal, Herrera glared at some of the 72 zero-emission, self-driving vehicles.

“They got rid of jobs, there’s no more drivers,” he said, looking across the fence at the little green carts. “And so this is why we’re skeptical at all when they wanna say zero emissions.”

Because of all the uncertainty, the ILWU isn’t take any chances. In September 2017, Gov. Jerry Brown signed a budget bill allocating $900 million from the sale of carbon permits under California’s cap and trade program.

Up to $140 million will be sent to the ports for clean freight and ships, but the ILWU lobbied hard to ensure that none of it could be used for automated equipment. Union workers say they aren’t against electric vehicles — they just want to be the ones driving them.