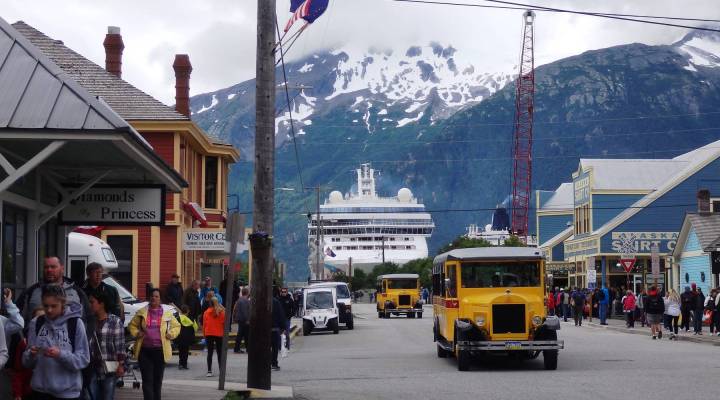 One hundred years ago, Skagway, Alaska was the entryway for fortune-seekers of the Klondike Gold Rush. Its present-day economy is dependent on a different sort of gold rush: cruise ship tourism.

But the people in Skagway are worried about losing their prime spot in the cruise market. That’s because a private company holds the key to the waterfront.

If you’ve ever been on a cruise to Alaska, chances are good you stopped in Skagway. Lisa Chapple, a tour guide who is British, comes here every summer to show people around.

“So has anyone here been to Skagway before, or is this the first time?” Chapple asked a bus full of tourists on a July afternoon.

This tiny town of 1,000 hosts about a million visitors in the summer. “Basically it’s our main economy,” said Skagway Mayor Mark Schaefer. He has a lot on his mind. “We’re literally running out of time,” Schaefer said.

Skagway is teetering on the edge of losing a big share of the cruise market. Ships are getting more and more massive. To make room for them, Skagway needs to build a new dock. But it can’t do that without permission from the White Pass and Yukon Route Railroad, a gold rush relic-turned powerful tourist attraction. The railroad has leased much of Skagway’s port since the 1960s.

The White Pass and Yukon Route Railroad wants at least 15 more years of guaranteed control over key pieces of the waterfront. Skagway has a choice: Say yes to the railroad and keep its hold on the cruise market, or say no and try to take back its waterfront. “The proposal that we’ve made ensures that both parties will have benefit from the agreement,” said White Pass president John Finlayson. The railroad’s current lease is set to expire  in 2023, and the proposal  for a new lease would run through 2038.

Mayor Schaefer supports the current arrangement.  “If it’s not broken, why fix it?” he said.

Here’s another complicating layer: White Pass is the biggest employer in Skagway. In fact, Schaefer is a manager with the railroad and half of the town’s governing body works for the company.

Despite the railroad’s deep roots, not everybody supports giving it a longer lease. Business owner Gayla Hites was one of the critics who spoke out against the extended lease at recent public meetings.  She questioned the company’s response in the past to lead contamination issues at one area in the port. “Nobody trusts them,” Hites said.

To cruise ship visitors, this decision might not make much of a difference. If the big ships can’t dock in Skagway, they’ll just go to another Alaska port.

But to the people in this tiny town, entire livelihoods could depend on it.