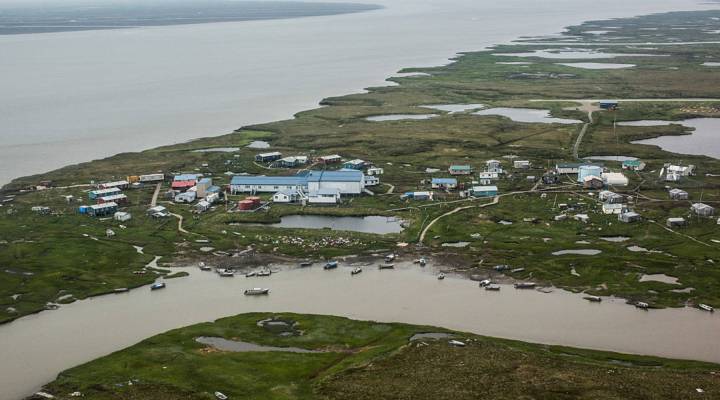 The village of Newtok is seen from a plane on June 29, 2015 in Newtok, Alaska. Andrew Burton/Getty Images

The village of Newtok is seen from a plane on June 29, 2015 in Newtok, Alaska. Andrew Burton/Getty Images

The Crystal Serenity, with 14 decks and 1,700 passengers and crew members, will be the largest cruise liner to make the journey when it sets sail in August, the The Guardian reported. Just 17 passed through last year, and most were a fraction of the size. The Crystal will take about a month to sail from Seward, Alaska to New York. Rooms started at around $22,000, and they’re all sold out.

The trip wouldn’t have even been possible just a few years ago. The Guardian notes the ice pack has thinned enough for commercial, government and military ships to move though easily — they don’t even need an icebreaker anymore. The Crystal is still going to have one, on an escort ship that’s also carrying to helicopters, because the trip is pretty dangerous. The Canadian and American coast guards are also training for a potential rescue.

Along the Crystals route are several small towns that are still getting used to the traffic. Crossings have doubled since 2008. Nome, Alaska, where The Guardian reported from, had ships docking more than 730 times last year — up from about 35 a couple decades ago. While some towns are looking forward to tourism dollars, others are losing important parts of their local economy to the warmer climate.

“The lack of ice is making it tougher to find the crab and harvest them,” one fisherman told The Guardian, saying his haul had dropped sharply. “We are not making money, we are just making ends meet.”

For those folks, an influx of rich tourists on excursion from their cruise might feel like adding insult to injury.