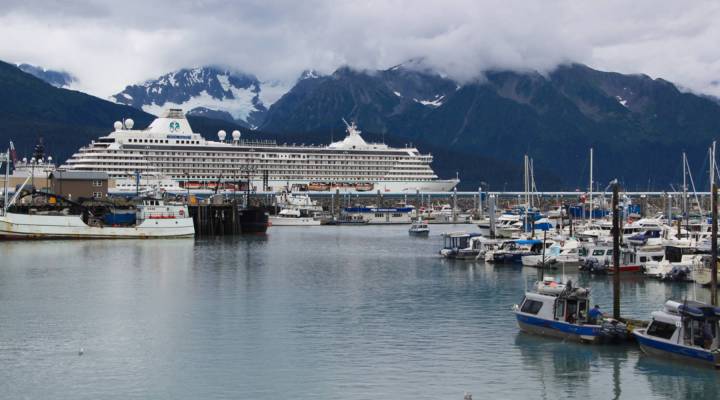 COPY
The Crystal Serenity hours before leaving Seward, Alaska on Tuesday, August 16. It's the largest cruise ship by far to attempt the Northwest Passage.  Graelyn Brashear/Marketplace

The Crystal Serenity set out from Seward, Alaska this week on a historic trip. With 1,700 people onboard, it will be the first big luxury ship to chart a course through the Northwest Passage, the once-elusive sea route from the Atlantic to the Pacific above North America.

Charlotte Brandt and her husband Bob have been on a lot of cruises, but as they sat in one of the ship’s eight restaurants before it left port Tuesday, they said this one was going to be something special. It cost them more than $21,000 each and will take nearly a month, and they’ll have the chance to go on kayaking and hiking expeditions far above the Arctic circle.

“We just thought, ‘Wow, this is just going to be fantastic,’ and we wanted to be part of the great adventure,” she said.

Six decks up, Crystal VP John Stoll was in the ship’s Palm Court, where technicians were connecting cameras to big flat-screen TVs, which will show live footage of whatever the Serenity is sailing past—icebergs, polar bears. He said this kind of experience is what a lot of cruise customers are hungry for.

The glitzy atrium aboard the Crystal Serenity, the largest cruise ship to attempt the Northwest Passage.

“My dad, when he was in his 50s or 60s, he wouldn’t dream of getting in a zodiac and going ashore, getting in water up to his ankles,” Stoll said. “Now it’s a driving force in the industry. People are looking for boutique experience, exclusive, intimate.”

Cruise companies aren’t the only ones seeing opportunity in the Arctic. There’s been a big uptick in ship traffic there, but it’s also risky. Huge floating chunks of ice can be unpredictable, some of the routes are still uncharted and ships have run aground. If they do, they could be thousands of miles away from the nearest deepwater port.

Which is why Crystal has planned very carefully. It’s paying a British icebreaker to accompany it for most of the way, stocked with extra provisions, lifeboats and scouting helicopters.

Still, a lot of people are worried. One of them is Margaret Williams, the director of the World Wildlife Fund’s Arctic Program. She says people want to use and marvel at the new ocean at the top of the world. That can put passengers at risk, but also the environment.

The Crystal Serenity shortly before leaving Seward, Alaska with 1,700 people aboard on Tuesday, August 16.

“We know that there will be more vessels on the heels of the Crystal Serenity, more cruise ships coming to see the Arctic as it’s changing,” she said. “But we are not seeing the simultaneous increase in infrastructure and readiness to respond to oil spills and disasters.”

Austin Ahmasuk works for an organization focused on protecting subsistence resources for native communities in Nome, Alaska, where the Serenity will make a stop. While the ship’s visit will be an economic boon to tiny coastal towns, he said the native people who live there worry about long-term effects of pollutants from these ships on the fish and whales they still hunt.

“I think federal agencies and state agencies really need to open up their minds to environmental justice concerns, cumulative impacts concerns,” he said.

Crystal’s John Stoll said he’s aware that all eyes are on this ship.

“The way we’re doing it we hope is the right way,” Stoll said. “This is a very, very special part of the world and we don’t want to change it. We want people to be exposed to it, because they should be.”