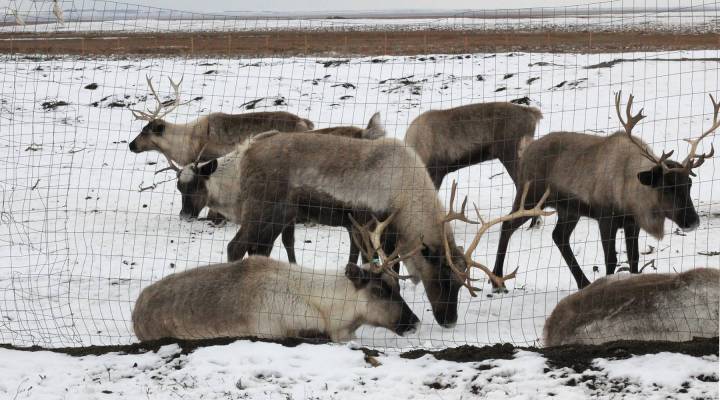 COPY
When Meshik Farm reindeer are not grazing on the tundra, they live in a pen the size of football field.  Avery Lill/ for Marketplace

When Meshik Farm reindeer are not grazing on the tundra, they live in a pen the size of football field.  Avery Lill/ for Marketplace
Listen Now

Life in rural Alaska is expensive. For the many small villages that are not on the state road system, planes and boats are the only way in and out. For Port Heiden residents in Southwest Alaska, a gallon of milk can cost more than $20, and a pound of bacon can cost more than $13. So two years ago, the village fund raised and won grants to start a reindeer herd and run a farm, as a way to produce its own fresh food.

The purpose of this farm is two-fold — to provide fresh food and economic infrastructure.

“We would like to be a sustainable village on our own and to be able to keep those dollars and jobs in our community,” said Adrianne Christensen, the  director of business development at the Native Village of Port Heiden. “We have only 100 people. So if one person is employed, that’s one percent of our community more that has a job.”

Jake Carlson, 19, works for the village as a farmer. On a bitingly cold fall day, he walked behind the reindeer, herding them onto the tundra where they would graze for a few hours. The only sounds as he marched the reindeer out of their paddock were the gusty wind blowing across the open plain and the light click of hooves.

“You can see they’re calm,” said Carlson. “They usually listen to what I want them to do.”

Carlson makes $15 per hour and puts in roughly 30 hours a week. In addition to the reindeer, he takes care of pigs, chickens, rabbits and a cow. A few other Port Heiden residents and some committed volunteers keep Meshik Farm, which is funded by donations and grants, running.

Reindeer herding, once popular on the Alaska Peninsula, declined in the mid-20th century. The village decided to re-establish the tradition after steep declines in the wild caribou population the majority Alutiiq community normally hunts. They brought in 29 reindeer in 2015. Christensen said people in the community missed fresh game meat.

“We were having to order beef and pork and chicken. We thought, ‘Well, we should become reindeer farmers,’ and so we did,” said Christensen.

Right now, the main hurdle is growing the reindeer population. The reindeer’s birth rate is good, but bears and wolves have eaten a number of the animals. The village wants the population of 30 reindeer to grow to 100 before they harvest any for meat. In the meantime, the rabbits, chickens and pigs are supplying the fresh food the village craved.

The farm is not yet making money, but the village is committed re-establishing a local food source, one that keeps jobs and people in the village.