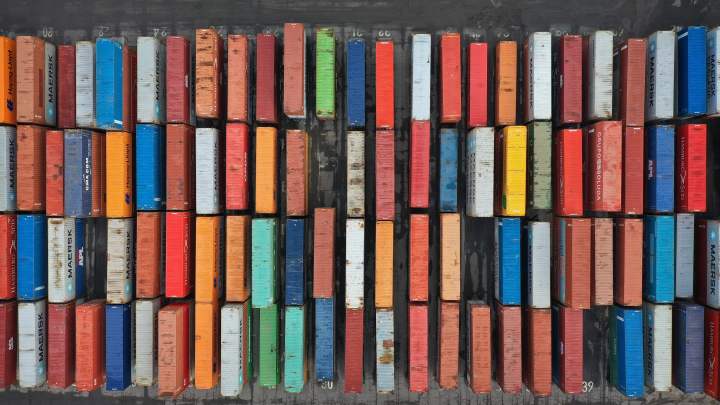 COPY
Shipping containers at Seaforth Dock in Liverpool. In the latest trade deal, U.S. tariffs are being replaced with import quotas. Paul Ellis/AFP via Getty Images

Before Joe Biden became president, he campaigned on repairing frayed trade relations with our principal allies, the major economies of Europe and Asia, after four years of conflict, rancor and tit-for-tat tariff battles with said allies. Some of that repair is coming to fruition.

On Tuesday, American and British negotiators meeting in Baltimore announced a deal in which the United States and United Kingdom will remove most of the remaining Trump-era punitive tariffs on the other side’s imports. That comes on the heels of similar deals for the U.S. to remove tariffs on steel and aluminum coming from the European Union and Japan.

Geopolitics, rather than a wholesale shift in trade policy, seems to be driving the improvement in relations.

The new trade deal is nice for British steel and aluminum producers, who’ll get to sell into the U.S. at more competitive prices, as well as for American companies, which will be able to export more motorcycles, blue jeans and whiskey to the U.K. — tariff-free.

“The Biden Administration has worked very hard to remove a number of the significant trade irritants between the U.K. and the United States, the EU, Japan and the United States, saying to these countries, ‘You are among our favored trading partners and therefore you are getting a better deal,’” said Jennifer Hillman, a senior fellow at the Council on Foreign Relations.

In the recent trade deals, U.S. tariffs are being replaced with import quotas. That’s an important detail, said Syracuse University economist Mary Lovely. “So there’ll still be restrictions on how much steel can come into the United States. And that meets the Biden administration’s goal of supporting workers in the industry,” Lovely said.

Meanwhile, there’s been no de-escalation in the Trump-era tariff-war with China, said Doug Rediker, a nonresident senior fellow at the Brookings Institution.

“The phase-one tariffs were widely condemned by then-candidate and now-President Biden. And yet those tariffs remain in place, virtually untouched,” he said.

The Biden administration has yet to fully articulate, let alone execute, a comprehensive policy to strengthen the U.S. economic alliance in Asia — and counter China’s growing power, Rediker added.