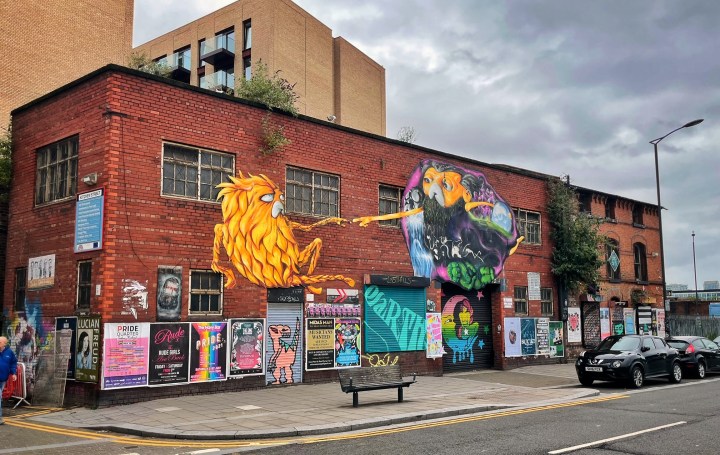 COPY
A mural painted on the wall of a building in the Liverpool's Baltic Triangle district. Located just outside the now former World Heritage site, could it be a model for how the city balances history with economic vibrancy? Victoria Craig

A mural painted on the wall of a building in the Liverpool's Baltic Triangle district. Located just outside the now former World Heritage site, could it be a model for how the city balances history with economic vibrancy? Victoria Craig
Listen Now

The move was met with fury by many who see the northern English city as one that honors its past while also evolving economically.

Just outside the now former World Heritage site is a district called the Baltic Triangle. It’s an old industrial area that, when Liverpool was a thriving trade city, housed merchant cargo before it was hauled onto ships bound for North America and the Caribbean. The Grade II-listed buildings and warehouses – which have legal protection from certain kinds of development or demolition – are now home to artists, filmmakers and young entrepreneurs.

Liam Kelly, chairman of Make, an organization that provides support and resources to businesses in the area, told the BBC’s Victoria Craig this historic area has stayed true to its roots while also nurturing a vibrant cultural scene. The following is an edited transcript of their interview.

Liam Kelly: The story of it starting is probably the same as every other place similar like this in the Western world. It was about the availability of space, the affordability of space, the gentrification of the center of the city. So initially, that was the music venues, some of them being pushed out of the city center and setting up out here, and then a couple of independent arts venues set up, a two-yearly arts festival. And it just snowballed from there.

Victoria Craig: And a lot of the buildings, I imagine look like what they looked like for their original purpose, the developers have kept them true to what they are, while also transforming them. So how important is this area’s heritage to the consideration of what it becomes in the future?

Kelly: Good question. Liverpool has a complex heritage, and this area is no different to that. So one block will look like Victorian brick warehouses, and then another block will look like sort of mid-2000s, maybe ’60s, ’80s sort of buildings. And some of them have been converted really well, some of them have been converted really nicely and some of them are in disrepair. But that is this whole city looks like because, you know, it was bombed really heavily in the Second World War, it became fashionable to clear sites in the ’50s and ’60s, the country didn’t really care too much about heritage, particularly city heritage. And Liverpool was really in poor economic decline and there wasn’t a lot of money to invest in these buildings, so they went unoccupied for a very long time. And some of them were just beyond saving.

Kelly: Appearance is a is an interesting word to use. Because the design and the way that buildings look is one of the big criticisms that people have about the development, particularly in in the Baltic, quality is really hard in a city where land value is really low. There’s a lot of compromise in order to get things built. And some of the stuff that’s been built over the last 10 years has been awful, really, really awful. And some of it has been really, really great. So we’ve got this like mixed fabric of great quality and poor quality. And I think that that’s what’s frustrating some people when it comes to preserving heritage and the way things look.

Craig: What is the approach, then, to developing this area?

Kelly: Well, there isn’t a uniform approach. That’s the issue. There is a strategic regeneration framework, but it’s not part of planning law. So, really, you’re at the mercy of the private developer and their view on what is quality and the planning authority haven’t had much power or willingness over the last 10 years. Yeah, we haven’t been very brave in saying no.

Craig: So what do you think needs to happen in order to continue to rejuvenate the area?

Kelly: I think that the question of ownership is a key thing for the whole city and probably for the whole country. If you want an area to be regenerated by activity, which is what’s happening right now, instead of being a victim of gentrification, where the activity creates buzz and excitement and wealth, and then that eventually forces the creators to leave because, literally, floor rents go too high, where you counteract that with ownership, if the people who are doing the change and taking the action are the ones that own it, and they’re the ones that benefit from the uplift and wealth and the uplift in value, then they can use that again to do the next thing rather than just being moved on.